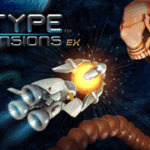 Villordsutch reviews Z-Exemplar on the Steam… Back in 1987 Irem released a side-scrolling shooter called R-Type upon the arcade houses across the world, and this caused Gaming Waves that are still being felt today.  It was a glorious game, with swarms of enemies, bosses so huge and grotesque that they were in fact morbidly beautiful at the […]

After reaching the heady heights – in numerous landscapes – then proclaiming yourself The Sentinel, our calling in the Your Sinclair Top 100 now sees us return to the inky black.  Number Six from Electric Dreams Software sees us going nose-to-nose against Bydo, as we take control of R-Type. R-Type began its life in the […]

Villordsutch with ten ZK Spectrum games you have to play… As I’ve happily played through the Your Sinclair Top 100 over the past three months I’ve also had the chance to trawl through my wide variety of numerous other games too.  Granted not all these games been great – as seen in the Top 5 […]