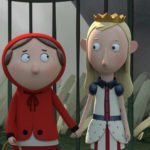 Oscar Nominated Short Films 2018: Animation, 2018. Dear Basketball Directed by Glen Keane. Starring Kobe Bryant. You needn’t be crazy about basketball to get something out of this ethereal adaptation of Kobe Bryant’s retirement letter to The Players’ Tribune, which is rendered via watercolour while accompanied by Bryant himself narrating his own letter. There’s plenty of […]