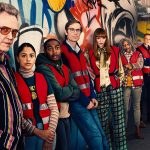 Amazon Prime Video has released a trailer for The Outlaws, the BBC One comedy-crime thriller series from creators Stephen Merchant and Elgin James which follows seven lawbreaking strangers who are forced to repay their debt to society with court mandated community service. The series, which aired here in the UK back in November, sees Merchant, […]