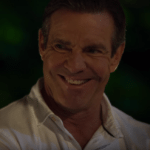 Dennis Quaid is set to take on the role of Ronald Reagan in a biopic of the 40th President of the United States, which is being directed by Sean McNamara (The Miracle Season) and produced by Mark Joseph (Max Rose). THR reports that the film – titled Reagan – will explore his life from boyhood […]

Nicolas Cage may look to redeem his recent career misfires by starring as Ronald Reagan, the 40th President of the United States, in an upcoming biopic centered around the revered conservative figure. Page Six reported the news, claiming that Cage has been offered the role and is in the process of deciding whether or not […]

Robert Davi (The Expendables 3) has been cast in the new Ronald Reagan biopic as former Soviet Union leader Leonid Brezhnev, according to The Hollywood Reporter. The new film, simply titled Reagan, tells the story of Reagan as a youngster, through his acting years and into his presidency, according to the outlet. Young Disney Channel […]