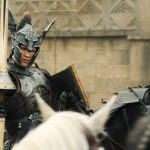 With its season premiere just a month away, HBO has debuted a new trailer for House of the Dragon, the first in a planned series of spinoffs from the hugely success (until the last two seasons) fantasy series Game of Thrones prequel. Set 200 years prior to GoT, the new series will tell the story […]