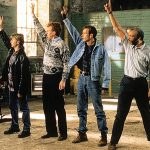 Here’s some news as surprising as the $250M worldwide gross that The Full Monty managed to dance its way towards in 1997; a Disney+ spin-off starring the original cast began filming in Sheffield today. The series will pick up 25 years after those hats were tossed in the air, with  Robert Carlyle (Trainspotting), Mark Addy […]