HBO has released the first trailer for its six-episode adaptation of The Time Traveler’s Wife. The series stars Rose Leslie (Game of Thrones) and Theo James (Divergent) in the lead roles and will premiere on May 15th. Watch the trailer below… Based on the 2003 novel by Audrey Niffenegger, The Time Traveler’s Wife is “an intricate and magical […] Ahead of its premiere on New Year’s Day, The BBC has released a new trailer for Steven Moffat and Mark Gatiss’ (Sherlock) upcoming three-part adaptation of Bram Stoker’s classic horror novel Dracula which stars Claes Bang in the title role as the iconic vampire; watch it here… In Transylvania in 1897, the blood-drinking Count is […] The BBC has debuted the first trailer for the upcoming TV adaptation of Bram Stoker’s classic horror novel Dracula from Sherlock creators Steven Moffat and Mark Gatiss, which stars Claes Bang (The Square, The Girl in the Spider’s Web) in the title role as the iconic vampire; feast on the trailer here… This retelling of […] 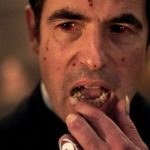 The BBC and Netflix have unveiled the first official images from Sherlock creators Mark Gattis and Steven Moffat’s upcoming three-part TV adaptation of Bram Stoker’s clsassic horror novel Dracula, which sees Claes Bang (The Square, The Girl in the Spider’s Web) as the iconic vampire. The three-part series is being directed by Jonny Campbell (Westworld), […] Last year it was announced Mark Gattis and Steven Moffat, the duo behind the reimagined Sherlock series, were beginning development of a new series based on Bram Stoker’s classic horror tale, Dracula. The series has now found a home as it will air on the BBC and Netflix for those outside the United Kingdom. Set in 1897, the […] Former Doctor Who showrunner Steven Moffat is set to adapt Audrey Niffenegger’s novel The Time Traveler’s Wife, with Deadline reporting that the project has received a straight-to-series order from HBO. Based on the 2003 novel, the series is described as “an intricate and magical love story about Clare and Henry, and a marriage with a […] In 2013, Doctor Who celebrated its 50th anniversary with the special episode ‘The Day of the Doctor’, which saw Matt Smith’s Eleventh Doctor joined by David Tennant’s Tenth Doctor, and the late John Hurt as the previously-unseen War Doctor. However, now-departed Who showrunner Steven Moffat has revealed that he originally wanted to include Christopher Eccleston’s […]

Following on from the Pearl Mackie interview earlier our final interview to celebrate the Doctor Who Christmas Special “Twice Upon a Time” being just a week away is with Steven Moffat, writer and outgoing showrunner.  Also at the end this interview there are a few words from Peter Capaldi himself, who makes his final appearance […]

As we hit the Autumn, we edge ever closer to Winter and the traditional Christmas episode of Doctor Who, and the much-anticipated final outing of Peter Capaldi’s Twelfth Doctor. Not only will the episode welcome the newest lead for the show, in the form of Jodie Whittaker’s Thirteenth Doctor, but will also include the return […]

One of the co-creators for hit drama Sherlock thinks the show’s end may have come. The series began back in 2010, and has only managed four seasons in that significant period of time. This is mainly due to the scheduling of the show’s two stars, Benedict Cumberbatch and Martin Freeman.Mark Gatiss claims that this is […]