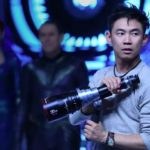 Malignant director James Wan will be going back to his horror roots once again as The Hollywood Reporter announced Wan is set to adapt Robert McCammon’s horror thriller Stinger for NBC’s Peacock under a new title, Teacup, as a half-hour series. Published in 2015, McCammon’s Stinger “takes place during a 24-hour period in Inferno, Texas, a town that’s […]