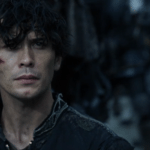 Out of the cast of The CW’s The 100, Bob Morley’s Bellamy has become a fan-favourite character on the show and has gone through quite a journey since the beginning of the series. He’s gone from being a rather rebellious kid to an important member and leader of Skaikru, even as he’s made some controversial decisions […]

A new trailer for the fourth season of The 100 has been released, showing fans what to expect as Clarke, Bellamy and the rest of the Grounders and surviving Sky crew deal with the fallout of Earth’s nuclear disaster. Watch the extended trailer here… The 100 stars Eliza Taylor as Clarke, Paige Turco as Dr. Abby Griffin, […]

The 100 is set to return to The CW this February, and the network has released a trailer for the upcoming fourth season of the post-apocalyptic drama series, which you can watch right here… For two seasons, the refugees of The 100 sent to Earth have been at war. First with themselves, then with the […]

The CW has announced that it has renewed its three DC superhero shows The Flash, Arrow and DC’s Legends of Tomorrow as part of a wave of early renewals. Also renewed for another season is fellow comic book adaptation iZombie, as well as The Vampire Diaries, The Originals, Supernatural, The 100, Jane the Virgin and Crazy […]