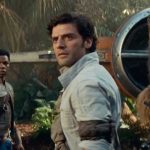 Deadline is reporting that Oscar Isaac is set to star in The Card Counter, a revenge feature from Oscar-nominated writer-director Paul Schrader (First Reformed). The feature will see Isaac as William Tell, “a gambler and former serviceman who sets out to reform a young man seeking revenge on a mutual enemy from their past.” “Schrader […]