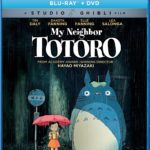 My Neighbor Totoro, 1988. Written and Directed by Hayao Miyazaki. Featuring the voice talents of Tim Daly, Dakota Fanning, Elle Fanning, and Lea Salonga. SYNOPSIS: The classic Hayao Miyazaki movie My Neighbor Totoro is on Blu-ray (again) in a new Blu-ray plus DVD edition released by GKids, which has taken over home video distribution of […]

Ricky Church continues his countdown to Batman v Superman: Dawn of Justice with Injustice: Gods Among Us… Superman is without a doubt one of the most heroic figures in fiction; he’s uncompromising in his belief in the goodness individual people and the world has to offer. He’s a beacon to ordinary people and heroes throughout […]

Ahead of its US release in two weeks, a new trailer has arrived online for director Steven C. Miller’s upcoming thriller Submerged, which we have for you below… A limousine joyride goes berserk in this breathless, pulse-pounding thriller. Jonathan Bennett (Mean Girls) stars as an ex-soldier turned bodyguard hired to protect a young woman. But […]