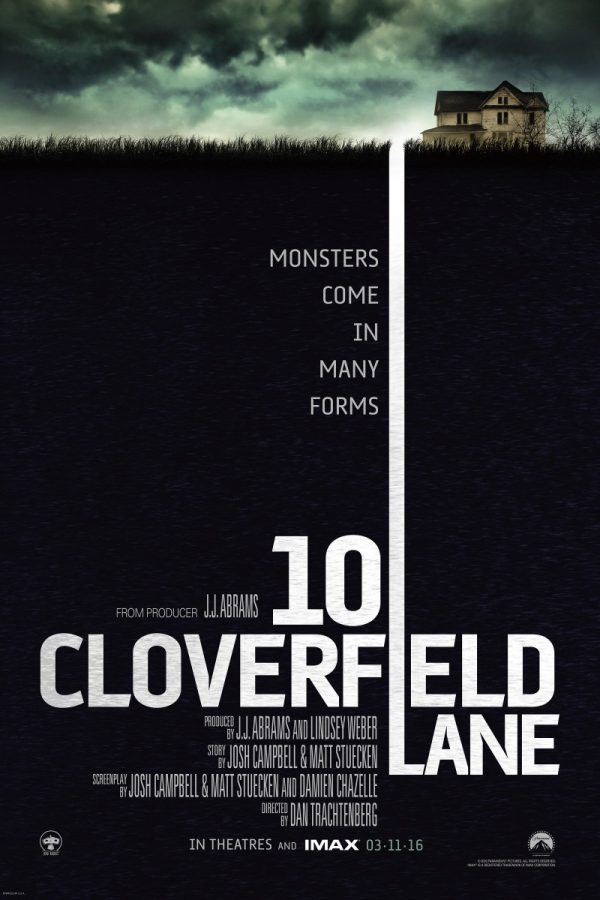 A woman awakes in an underground bunker after being knocked unconscious in a car accident. Two men are with her, claiming the world up above has been devastated by a chemical attack. 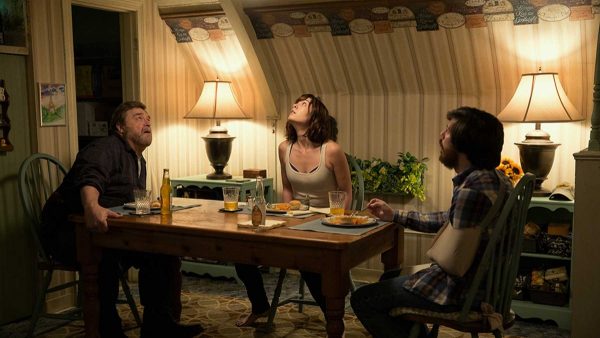 Back in 2007, a mysterious trailer appeared before the first Transformers movie featuring a party in Manhattan that was interrupted by a downtown explosion, and it ended with the Statue of Liberty’s head being thrown down the street – no title was shown, only a release date. It remains, to this day, one of the most effective ‘teaser’ trailers of all time. In the years since, rumours of a sequel to 2008’s found-footage monster movie Cloverfield have been just that – rumours. Then two months ago, out of the blue, producer J.J. Abrams did it again – another mysterious teaser trailer hit the internet, this one showing three people in a bunker, while some sort of unseen chaos reigned above ground. Abrams has described this film as a ‘blood relative’ of the first film, rather than a direct sequel. It’s the kind of film that’s more effective the less you know about it going in – however, if you go in expecting it to tie in to the events of Cloverfield in a clever and satisfying way, you may end up disappointed, as I did.

(Needless to say, heavy spoilers ahead)

The film starts off great – in fact, its great right up until the last 10 minutes, but I’ll get to that. Michelle (Mary Elizabeth Winstead) breaks up with her boyfriend and drives out of town, gets into a car accident and wakes up in a basement handcuffed to a bed with an IV sticking into her arm. Howard (John Goodman), a grizzly survivalist, tells her that he pulled her from the wreck, saved her from a chemical attack that has killed everybody above ground, and that she’ll have to spend the next year or two in his bunker with only him and a local farm-hand called Emmett (John Gallagher Jr.) for company. Naturally, she’s suspicious about this, but when she witnesses a lady with burning skin trying desperately to get into the bunker (as Emmett managed to do successfully) she accepts her temporary surroundings. Nevertheless, she and Emmett quickly become suspicious that Howard was responsible for the kidnapping of a local girl two years prior, so they hatch a plan to escape. 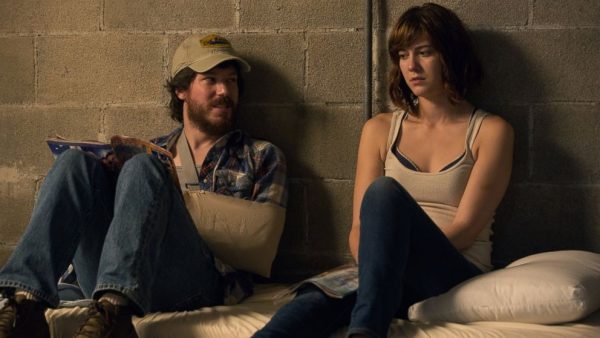 As I said before, this film has a lot going for it – the three leads are all excellent, but John Goodman must be given special praise for his performance as Howard, a conflicted, bubbling cauldron of rage. We never know if he truly is planning to do to Michelle what he did to the local girl (a final act change of appearance and the fact that ‘girls’ are more on his mind than ‘women’ suggests as much), or if he really is trying to make amends for his past crimes by showing her and Emmett some hospitality. Because this film is essentially a three-handed drama set in a confined space, it reminded me a lot of last year’s Ex Machina, and first-time director Dan Trachtenberg deserves credit for exploring the confined environment with inventive camera angles, and for sustaining such an effective atmosphere of tension. This is aided by a brilliantly brooding score by Bear McCreary, a veteran of super-tense TV shows like The Walking Dead and Agents Of S.H.I.E.L.D. There are several nightmarish images in the film that will linger in the memory (burning flesh, a claustrophobic air duct, a scratched ‘help’ message dripping with blood), and one of the most unbearably tense moments (involving Santa Claus!) actually culminates in the film’s biggest laugh – a great example of writing, acting, directing and music coming together.

Some people have claimed that it’s unrealistic that Michelle and Emmett could prepare an effective escape plan with Howard in close proximity at all times, but we don’t know how long a time-span the film covers, and if they were smart and did the bulk of their planning while he was asleep or otherwise indisposed, I can believe that. What I find much harder to believe and accept is what Michelle does as soon as she leaves the bunker. Up until that point she’s a smart, cautious and resourceful character (she even made her own make-shift Hazmat suit out of an old shower curtain), so why would she take her helmet off as soon as she gets out just because she sees some birds flying? Surely it’s possible the chemicals used in the attack could affect humans and not birds, and how does she know the birds aren’t slowly dying like the lady who tried to get into the bunker? 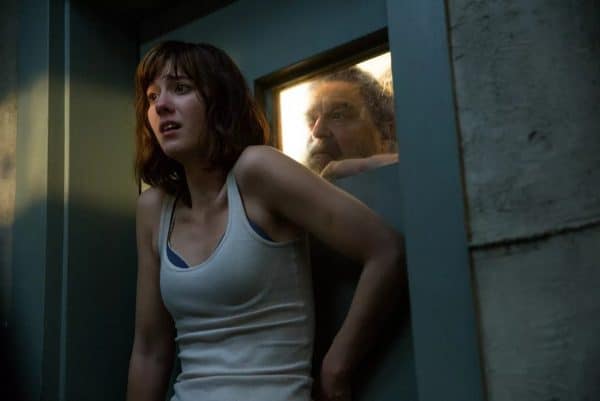 From there until the credits roll the quality of the film goes down quicker than the sun (it literally goes from magic hour to pitch black in the space of two minutes). When Michelle reaches a road sign she’s given a comically clear-cut choice between travelling to safety or back to danger. Personally, if I’d been through what she had, I would want to get somewhere safe and try to get in contact with my loved ones, not head straight back into danger like she does. There’s a wishy-washy back-story where she says she’s regretted not helping strangers in need in the past, and this is meant to serve as her motivation for this choice, but I didn’t believe for one second that this would be her character’s first priority after escaping from monsters (both human and alien).

Ah yes, the aliens (it’s a J.J. Abrams production, so aliens or spies were always going to be in there somewhere). Maybe I’m missing something, but I thought the creature(s) in Cloverfield were monsters that rose up from the sea, not aliens from outer space – and yet in this film, aliens is clearly what they are, spaceship and everything! When Michelle sees it for the first time, and her reaction is an exasperated “Come on!”, I couldn’t help but wholeheartedly agree. Like Super 8, this is a perfectly good drama that’s ruined by having alien stuff unnecessarily shoehorned in. What makes this doubly depressing is the film-makers didn’t even fully commit to the decision to link this to the original Cloverfield – the connections to it are tenuous at best (Bold Futura Satellites, Slusho), and the destruction in New York isn’t even hinted at. 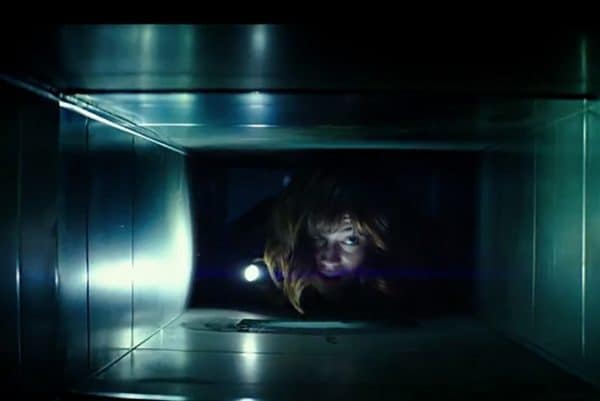 This could have been a taut little drama, a great calling-card for a promising new director, but instead it’s a half-baked semi-sequel that starts off great then takes a bizarre turn into sub-War of the Worlds/Twilight Zone territory at the end. A sad example of Hollywood’s current desire to make every film part of a bigger ‘Cinematic Universe’ – the original film (like its lead monster), should have been left alone.