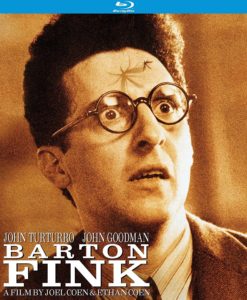 Barton Fink has been reissued by Kino Lorber in a new Blu-ray edition that doesn’t say “Special Edition” anywhere on the packaging but basically is one (hence the use of “(Special Edition)” on their site and here). The print has been improved a bit since the previous Universal release, and Kino commissioned some new interviews that are included here, along with eight deleted scenes. “I thought it was a strange film,” actor John Turturro recalls in the new 14-minute interview on this Barton Fink (Special Edition) Blu-ray from Kino Lorber. As Coen brothers movies go, this one veers a bit into David Lynch territory as it tells the satirical story of a Broadway playwright seduced by Hollywood’s siren call during the 1940s.

Fink (Turturro) arrives in Los Angeles, eager to make a few easy bucks, and soon falls into the old Hollywood studio machine. He’s ordered to write a low-budget wrestling movie, something he barely knows anything about, and retreats to a dilapidated hotel to do his work. As he struggles with writer’s block, he finds himself feeling like he’s losing his sanity.

Fink’s neighbor is a gregarious insurance salesman (John Goodman) who thinks he’s being helpful by showing the writer some wrestling moves. Meanwhile, he has overbearing studio boss Jack Lipnick (Michael Lerner) breathing down his neck, and he befriends an alcoholic writer whose wife he has an affair with. As in many Coen brothers films, the situation quickly spirals out of control, leading to a finale that’s a bit more vague than many of their other stories. When considering Barton Fink, it’s best to consider the story as not only satire but also as one heavy with metaphor. For example, the ticking of the clock and the increasing heat in Fink’s hotel room serve to show us what’s happening in the writer’s head as he struggles with putting words to paper and every little distraction becomes magnified. Even the fire that engulfs the hotel can obviously be seen as one that’s not to be taken literally, which gives this movie a bit of a David Lynch vibe.

In that respect, Barton Fink is less-straightforward than many of the Coens’ other films, in which the action tends to be more literal but the characters’ motivations may not always be clear. It’s interesting to note that they wrote this film during a break when they hit a roadblock during their work on the screenplay for Miller’s Crossing. Clearly they not only had some things to say about writer’s block but also perhaps wanted to let their subconscious minds wander a bit.

The previous Blu-ray released by Universal had no bonus features while the original DVD issued by 20th Century Fox had eight deleted scenes, a stills gallery, and the trailer. This new edition from Kino Lorber drops the stills gallery but keeps the deleted scenes, which are mostly throwaway pieces – one, however, where a note is slid under Barton’s door, makes one wonder if the Coens had other ideas in mind for the film. According to what I’ve read online, the transfer for this Kino Lorber edition is a bit different from what Universal used for their Blu-ray. The screen grabs I’ve seen indicate that this version is a bit softer but more film-like, while Universal used a lot of edge enhancement. Between that and the new interviews conducted for this disc, I’d say it’s a worthwhile purchase for fans.