Liam Hoofe reviews The Girl Who Played With Fire – Millennium #1… 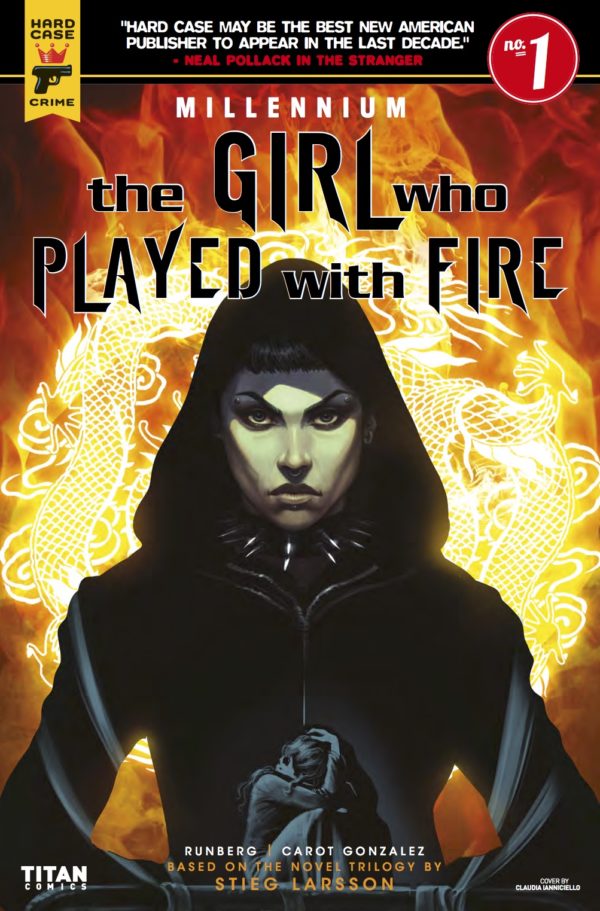 Following on from the excellent ‘The Girl With The Dragon Tattoo adaptation is the second book in the Millennium trilogy, The Girl Who Played With Fire, published by Hard Case Crime and Titan Comics.

The Girl Who Played with Fire continues the story of Lisbeth Salander and Mikael Blomkvist a few months after the events of the first novel. Mikael Blomkvist and his Millennium magazine are booming, while Lisbeth is off, hiding in shadows and chasing those who have wronged her. Everything changes, though, when Lisbeth catches the scent of a sex ring taking place in the country, involving some very important people and ends up being accused of a triple murder. While on the run, she must clear her name, and Mikael may be the only man who can help her do that.

The obvious change between this book and its predecessor is the change in the lead artist, Homs, who illustrated the first installment in the trilogy, has been replaced here by Manuel Carot Gonzalez .  The change of artist doesn’t necessarily give the comic a different feel, as much as it changes the characters. Lisbeth and Mikael both feel like different characters here and that is a very interesting artistic choice. The changes are subtle, and they reflect the impact that the events of the first story have had on them. Mikael, despite being in a much better position that he was in the first novel, looks tired behind his smile – his eyes are webbed and his hair is unkempt.

Gonzalez and Runberg also allow the story to be told much more visually this time around. There are so many more frames per page, and while at times, this creates a visual clutter, at others it really adds to the atmosphere and story. The story is told a lot through visual expressions, and credit must once again be given to Gonzalez for that.  Gonzalez understands that a lot of these characters, especially Lisbeth, live their lives in the shadows, and he juxtaposes the beginning and the ending of the story well here, giving us a surprisingly bright color palette, to begin with, that slowly gets darker as the novel progresses.

The story itself is much slower paced than The Girl With The Dragon Tattoo. The tension here builds slowly, allowing the plot threads more time to gain momentum and it all leaves you waiting with bated breath for the second edition to finish the story.  Runberg’s dialogue is whip smart and often, straight to the point, there is not a lot of clutter here, which is something that actually weighs the original novel down somewhat.

Verdict: The Girl Who Played With Fire does away with the clutter of novels – delivering whip smart dialogue and well-paced action. For those who’ve not read The Millennium Trilogy, Hard Case and Titan’s comics are a great place to start.

Liam Hoofe is a teacher and a writer currently based in Madrid, you can hear more from Liam on Twitter @liamhoofe