Tom Jolliffe on a year to forget for Michael Fassbender, which leaves him at a potential career crossroads…

For years, Michael Fassbender proved a live-wire. An actor of fierce intensity, devotion and depth, unafraid to put himself into the most extreme roles. Whether it was Hunger or Shame, he bared everything (in every sense of the word). To many, the introduction to Fassbender would have come with a memorable role in Quentin Tarantino’s, Inglourious Basterds. To more mainstream audiences, he’s the young Magneto. To many an aficionado it seemed something of a travesty that this actor had never received recognition from the Academy before finally receiving his first nomination as supporting actor in 12 Years a Slave (which came in 2014). Two years ago he received another nomination for his portrayal of Steve Jobs in Danny Boyle’s acclaimed biopic.

Those years of intense independent character pieces, paved the way to mainstream praise in Oscar baited biopics and period pieces. Then came an odd choice… Assassins Creed. Lets face it, the transition from video game to big screen film has always been fraught with peril. There hasn’t been a legitimately good film yet. At best they’ve managed mediocre (or entertainingly bad). Even in the video game canon there’s never been anything greatly fascinating about the titular character of that franchise. At least not enough in principle to “attract” an actor of Fassbender’s calibre. One can only assume that money came into the process of making his decision. You might argue becoming a franchise regular in the X Men films could have been financially motivated in some ways but he’s taking the most complex character of that franchise, and following in the footsteps of the great Ian McKellen.

Assassins Creed came around a similar time of the bang average family crime drama, Trespass Against Us as 2016 drew to a close. As we come to the closing of 2017, another year has passed and things haven’t improved for Fassbender. There was the divisive latest entry in the Alien franchise, Alien: Covenant. Reviews from critics were reasonable. Solid even. From the audiences? The film was picked apart with even more savage disregard and bewilderment from the audiences than Prometheus (a quite shockingly dumb film). Whilst Fassbender’s performance in the previous film, was by far the most interesting part, this time out, such was the messy nature of Covenants script, that Fassbender seemed a little out of place, and the inclusion of two Michaels for the price of one only made things even more awkward for him in the film. As much as he remains one of the better performers, in the end his best aspects are merely repeated from Prometheus.

This isn’t entirely about him making bad choices. It’s partly about luck. He doesn’t, Assassins Creed aside, make odd choices (on paper anyway). Lets face it, every actor worth their salt wants to work with Ridley Scott. Likewise, Fassbender is offered Song To Song, the latest Terrence Malick film. As divisive as Malick’s work can be, when he nails it, he really nails it. He’s made some of the finest cinema in Hollywood history, but by the same token, when he misfires it’s disappointing. Then we have The Snowman, a popular crime novel being turned into a film and under the direction of Tomas Alfredson (Let The Right One In and Tinker Tailor Soldier Spy). Okay a major problem all the aforementioned films had was the script. However, if you work with an exceptional director you always have the hope they can hone sloppy writing into a coherent and engaging vision. 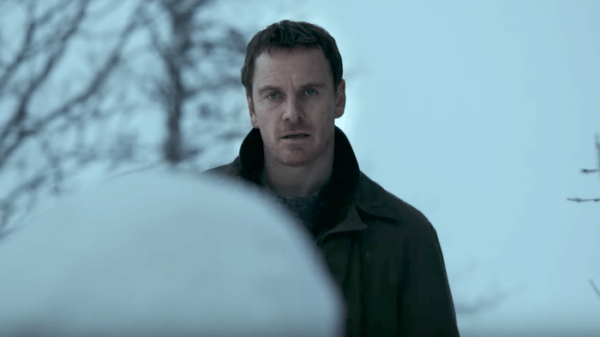 Song To Song was everything great about Malick, stylistically and visually but far too indulgent whilst the subject matter itself never felt particularly interesting. There were great actors in Malick’s film, but what was a rarity for his work, was the lack of a really compelling performance.

The Snowman, through a mixture of shoddy adaptation and studio politics has left a film so haphazard it even makes Justice League look cohesive. Critics and audiences alike tore ribbons out of a film where even the ordinarily watchable (as a minimum) Fassbender came across decidedly off key (as he did in Assassins Creed). If you think back to Christian Bale as an example in Terminator Salvation, his performance there was uncharacteristically woeful, where usually Bale is never less than good.

The issue is not with Fassbender’s abilities but perhaps he’s got to reach that stage Daniel Day-Lewis found pretty early in his career, and that is to build up the aura around himself. Fassbender has been prolific of late. He’s working solidly. Now granted, not everyone could take the DDL approach in quite the same way, but I wonder if Fassbender could pull himself back and pick his roles more carefully. For starters, what else can he do with Magneto? Or as an android in the Alien franchise? He’s explored almost every caveat of those characters where it gets to a point that all he can do is appear, chew some scenery and move on. It all boils down to whether Fassbender wishes to be a superb actor that people talk about this generation, or if he wants to become iconic. Hit that stage first and then he’s entitled to coast. He’s not reached Pacino’s level yet, or indeed DDL, De Niro etc. De Niro may have appeared in Bad Grandpa recently, but at the tail end of his career, after establishing himself in cinematic history, he’s in no danger of being forgotten. We still remember James Cagney, Marlon Brando, Jimmy Stewart etc.

Thus far Fassbender has reached a few rungs near the top of that ladder below the podium of greatness, but he’s slipped a few rungs. He’s sharing space with the likes of Christian Bale and Tom Hardy (Bale is arguably the closest). If Fassbender called time tomorrow you could hardly say his career has been less than stellar as a whole. He’s been electrifying for certain but it’s that seed of wonder. How much better can he be? Could he guide an exceptional film to the level of masterpiece? Every masterpiece needs an exceptional performance within it. A piece is only as good as its key elements and among those is your cast. Slap Steven Seagal in The Godfather as Michael Corleone and we wouldn’t be talking about the film today.

I’ve covered similar ground before in a piece about Scarlett Johansson. I say this as a cinephile who wants to see our best actors and actresses push themselves to greatness. There have been many who had the promise of greatness, only to fall short for an array of reasons. I look at Mickey Rourke’s output through the early to mid-80’s as an example of someone on the cusp of greatness only to fall away (for different reasons than Fassbender may potentially slip). Not everyone gets the opportunity of a second bite of the cherry either, as Rourke did with The Wrestler.

With a bit more luck and careful consideration, Fassbender still has more than enough time to place himself in the pantheon, though I grant you, cinema isn’t as explosively creative as it was in the 70’s. Sure I could cite Pacino, De Niro, Meryl Streep etc, but they benefited from the finest period in Hollywood cinema history. There is greatness but then there is legend. As exceptional as I’ve seen him, I still don’t think we’ve scratched the surface of Fassbender’s potential.