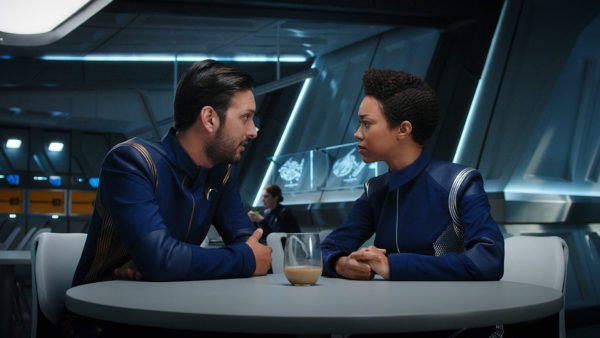 Decency is weakness and will get us killed and the lives of everyone on this ship and the Federation are at stake. So you do what you must, whatever you must, to anyone.

And so, after a short break, we’re back again.

To recap: after an engaging opening two-parter, Star Trek: Discovery struggled a little bit. Each episode maintained a certain baseline of quality, but the series as a whole lacked a certain identity – it never quite seemed like it knew exactly what it wanted to do, or what it wanted to be. Under the circumstances, that’s fair – it had a difficult production, so it’s not unreasonable to allow for it to be a little confused at the start – but thankfully by the end of the first half of the series it looked like Discovery was positioned to move in a new direction. While it wasn’t directly confirmed, smart money said that the cliffhanger ending of ‘Into the Forest I Go’ had left our crew in the mirror universe – which they established pretty quickly this week.

Admittedly, I had a few reservations about doing a mirror universe episode this early in the series’ run; if nothing else, episodes like this tend to rely on subverting what we know about our characters so far, and it felt a little bit early to pull that trick. As well as that, though, it was the worry that a mirror universe episode would err a little too close to prior iterations of Star Trek; I’ve noted before that, if the series is awash with continuity references to the point of building stories out of those references, it runs the risk of not being able to develop an independent identity. After episodes with Harry Mudd and Sarek, to return to the mirror universe seemed like it might not be the best choice for Star Trek: Discovery – or at least, not right now anyway.

Despite my doubts, though, I’ve got to say – it did pretty much work. 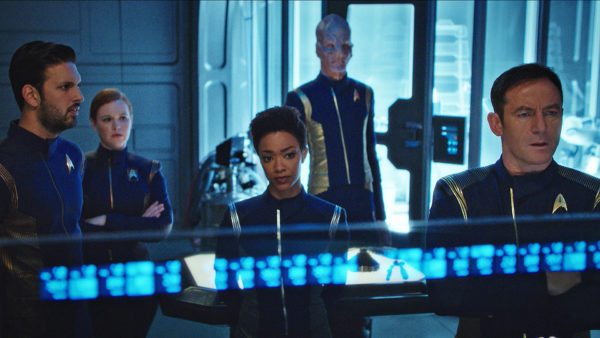 One thing I’d not considered, and I must admit that’s a lapse, is that the Mirror Universe has the potential to be a really interesting milieu to explore in 2017 – especially given that we’re visiting the fascist Terran Empire. At this point, the concepts were only sketched in quite quickly (understandable, given Discovery had a lot of exposition to work through this week), but there’s a lot of different avenues to explore with the concept of a dark reflection. Hopefully, Discovery will be able to pick up on some of those ideas, and give us a new approach to the mirror universe.

As it is, though? There’s a real confidence to this piece – no doubt because the actors and writers know what they’re doing a little more, but perhaps also buoyed by experienced Trek director and actor Jonathan Frakes. ‘Despite Yourself’ is, in effect, a ruthlessly efficient execution of all the best parts of any given mirror universe story; any concerns about not knowing the characters well enough can be dismissed pretty thoroughly by the time ‘Captain Killy’ makes an appearance, again emphasising just how much of a gift Cadet Tilly (and Mary Wiseman) is to the series.

In turn, I was glad that the story wasn’t wrapped up in this episode alone; there’s a lot of potential there, and it’ll be nice to see how things continue to develop. Presumably, at some point we’ll be set to actually meet the alternate Burnham or Lorca – and what’s the bets that we’ll see Emperor Georgiou at some point? There’s a sense that we might be about to establish a new status quo for Discovery, with these episodes acting as a pivotal turning point – it’s not difficult to imagine a vision of the series that explores the multiverse, a brand new final frontier of its own.

It really does feel like we’ve reached a point where Discovery can tell their own versions of classic Trek stories, lending them a distinctive sense of identity, pretty much in their sleep – now we just need them to start advancing some more new ideas in amongst it too. 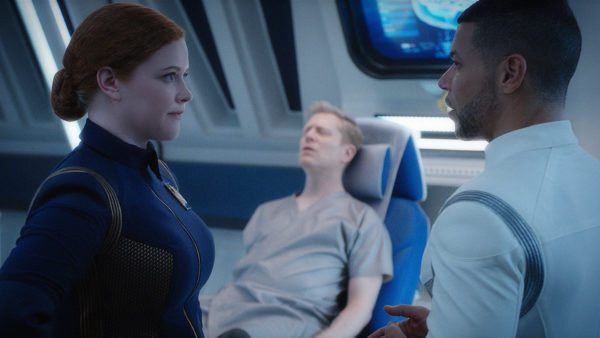 One of the other aspects that this episode focuses on is the ongoing story of Ash Tyler and Voq – confirming pretty much once and for all, if it was still needed, that Ash Tyler is Voq on some level. Its inclusion in this episode is quite neat, in fact; an obvious chronological necessity, sure, but there’s a certain thematic parallel between the crew of the Discovery dealing with their darker mirrors and Tyler dealing with his own darker interior. If nothing else, that’s a nice way to contextualise Tyler’s struggle in terms of the broader arc of the episode.

I’d be lying if I said the end of the last episode didn’t leave me with a few concerns about where Discovery was taking Tyler’s plotline; in some respects, it seemed to lean into gratuitous ‘darkness’, more interested in an aesthetic veneer of edgy maturity than exploring concepts with any real depth. Thankfully, ‘Despite Yourself’ sees a big improvement on that respect, taking the Tyler/Voq plotline in an interesting new direction; they openly address his PTSD, and further muddy the waters as to which identity is which. In making it that bit more complex – i.e. making it evident that the Tyler personality has grown beyond what it was meant to be, and it won’t be as simple as switching it back – Discovery has given this plotline a lot more scope to grow.

Unfortunately, though, ‘Despite Yourself’ sees Discovery make another of its old mistakes once again. In having Ash Tyler kill Dr. Culber, Star Trek: Discovery continues the trend of having all their major character deaths being POC; the fact that Culber is one half of the show’s celebrated same-sex couple only exacerbates this. In and of itself, it’s not necessarily indicative of much – though I would contend that it was possibly the least dramatically interesting choice available in that moment – but the fact that you can still point to this trend, ten episodes in, suggests something of a problem.

Overall, though? Setting the above issue aside – it’s more of a problem with the series itself than this episode in particular – ‘Despite Yourself’ proved to be a really entertaining installment from Star Trek: Discovery. It’s indicative of a show that’s increasingly confident in itself and its direction, able to deliver an engaging piece of television with real panache.