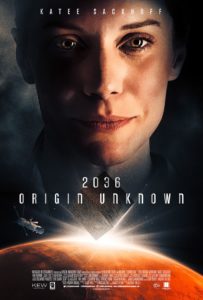 After a failed mission to Mars, A.I./ARTI is now used for the 2036 mission with a few human supervisors. A monolith of unknown origin is found there. It will have a big effect on Earth.

Low-budget science fiction has gotten a bad rep these days courtesy of the SyFy channel’s never-ending supply of Sharknado movies. But there was a time when there was consistent quality. From NBC’s The Time Machine to the BBC’s Threads to the Doctor Who film to even miniseries like Frank Herbert’s Dune. These were all attempts at using limited resources to be as creative as possible, and not to be squandered on bad acting, bad visual effects, and inherently idiotic ideas.

2036 Origin Unknown, a new independent movie from Parkgate Entertainment and Head Gear Films, evidently aims to be a return to form for this microcosm of the sci-fi genre. As the title implies, the movie takes a step back to the roots of 2001: A Space Odyssey, depicting an AI-led galactic journey to a planet in the hopes of investigating a monolith that could help the human race. In 2001, this took place on Jupiter, but in 2036 the planet is Mars.

It would be easy to look at this premise and cast 2036 aside as another 2001 clone, but the similarities do end there. Most of 2036 is set in the vicinity of a space station where the main protagonist Mack Wilson (Katee Sackhoff) oversees the proceedings on Mars, which are guided by an artificial intelligence named A.R.T.I. (Steven Cree) managed by her sister Lena (Julie Cox) of the United Space Planetary Corporation. And while it is true that this bottle format is implemented to preserve the production budget, it’s also clear that screenwriter Gary Hall took great steps during the scriptwriting process to make sure that his screenplay did not cause any special effects issues in the flick. Too often, in both television and film, I feel the writers go so crazy with their ideas that they don’t actually take their budget into serious consideration, which results in staggering diminishing returns from a VFX point-of-view (looking at you The Flash writers).

By not having this flaw, 2036 manages to keep a constant quality that helps create many enjoyable aesthetics in the movie courtesy of the production design, art direction, and CGI artists. Mars, for example, is beautifully realized, with its rocky, iron oxide surface and glaring red sandstorms. The station that Wilson resides in is a series of metallic chambers, with blue-green lights, multicolored computer panels, and an inherently claustrophobic atmosphere. A.R.T.I. “himself” is a fully CG character that manages to bring life to his expressionless figure in a way that even HAL was unable to. My only complaint in the visual effects department is that, while everything looks well-created, it often felt like the filmmakers over-relied on extensive particle effects to hide the geometry of the physical objects, but that could just be me.

While helping keep the visuals intact, there is one potentially big downside to using the bottle format, and that is the heavy reliance on the actors to convey the story. When you’re keeping your cast in a limited space, they have to not only rely on the dialogue for their emotional cues, but also for the progression of the narrative. The conflicts, the themes, the story beats, everything has to be be communicated via conversations, and that means even more pressure on the performers.

Luckily, 2036 avoids any pitfalls in this department courtesy of its stars, specifically Sackhoff. Wilson is someone who is emotionally-damaged, having experienced a tragedy in her life that she feels she was directly responsible for. With the constrains of the bureaucratic U. S. Planetary Corporation adding to her internal stress, Wilson is left with anxiety that Sackhoff subtly expresses through her shifting eye contact, wavering inflections, interactions with a stress ball, and soft-spoken sarcasm. It is another strong performance in her already esteemed sci-fi career, and one that is made all the more impressive when you consider that she had to essentially do all of this on her own. While Steven Cree and Julie Cox’s voices communicate with her in the movie, it should be pointed out that they were added in during post-production, meaning Sackhoff spends the majority of her time essentially talking to herself, though it never feels that way.

Cree himself does a fine enough job of being this ambivalent A.R.T.I., but he doesn’t really do enough to distinguish himself from the numerous other AI voices that have sprung up in the years since HAL said his iconic “I’m sorry Dave, I’m afraid I can’t do that.”

For a small chunk of the film, Sackhoff is also accompanied by English actor Ray Fearon, whose character of Sterling Brooks works in the same field as Wilson. I have a feeling that the first draft of 2036 gave him a lot more screen time as he has some interesting ethical dialogue, but his ultimate purpose here is to just move the plot forward. In fact, 2036 Origin Unknown’s inherent problem is that it doesn’t feel confident in what it set out to do. Director Hasraf Dulull was also the mind behind the story, however that story never settles down for one thing. It’s constantly jumping between these interesting plots, including: the effects of space activities on international relations, information warfare, corporate cover-ups, human nature, AI takeover, and machine rights. Yet, perhaps in an attempt to be purely original, Dulull refuses to give us a deep exploration of any of these intriguing areas.

Take Cox’s character of Lena. Her relationship with her sister is depicted as strained, but the majority of their conversations center around the morals behind extensive usage of an artificial general intelligence or the U.S. Planetary Corporation’s mysterious security policies, rather than the problems that caused their family divide. And even in those cases where they speak about A.R.T.I. and co., the dialogue feels more expositional than
“excavational”- Dulull would rather move onto the next thing than take the time to dig into these real-life situations and give them the attention they deserve.

Still, I would be lying if I said that his direction was sloppy. Despite working with each of these actor’s individually, Dulull has managed to create a movie where it feels like everyone was on the same set on the same day talking with one another like a regular cast rehearsal. There is a undeniable bond that forms between Wilson and each of her compatriots as they venture forward into 2036’s twists and turns. And with steady VFX, solid sound work from the audio department, a techno setting that is both suffocating and inviting, and a terrific lead performance from Katee Sackhoff, 2036 Origin Unknown is definitely one of the better low-budget sci-fi movies to be produced in recent years, and a standard setter for future made-for-television projects to come.

With well-received flicks like Ex Machina, 10 Cloverfield Lane, and Attraction also being made on relatively small budgets, I hope the genre makes a comeback for sure. Ideas are what drive science fiction, not blockbuster action.