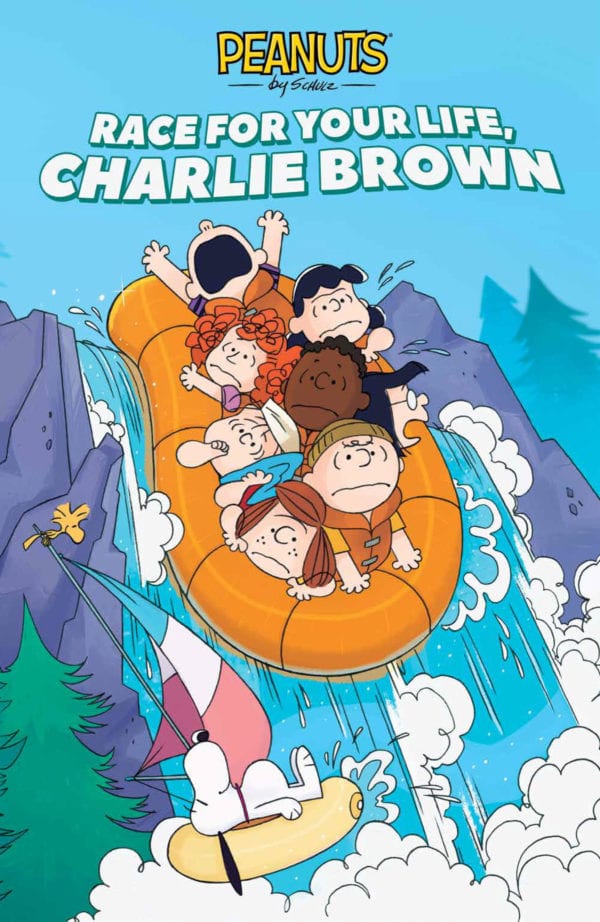 One of the coolest things about the Peanuts animated specials was that Charles Schulz himself was heavily involved in their creation. In fact, he was so heavily involved that he made sure his animosity for the title “Peanuts” was heard, guaranteeing that every cartoon bore the name Charlie Brown instead.

Released in 1977, Race for Your Life, Charlie Brown! was the third movie to arrive in the Peanuts film series, following A Boy Named Charlie Brown and Snoopy, Come Home. Arriving over 40 years later, Boom! Studios has published a comic book adaptation of this animated special. As Schulz was the writer for the movie, he is attributed as the writer for the graphic novel, though the team of Jason Cooper, Robert Pope, Katharine Eflrd, Jewel Jackson, Donna Almendrala, and Hannah White deserve the real credit for putting it together.

Is it worth your time to check out this artistic endeavor? The short answer is yes, but be warned about some of the more irate tropes of the Peanuts series. For the long answer, read on!

Race for Your Life finds the Peanuts gang attending a summer camp, and like most stories that place a tight-knit group of people together in a confined environment, it deals with their sexual frustrations. Of course, Peanuts, being a children’s serial, could never be that on the nose, but Schulz wisely incorporates subtle references to the overarching ordeal: Charlie Brown is at his happiest when he’s with the lovely Peggy Jean, the girls and boys are conflicted when separated by sex at the beginning, the male bullies have a toxic relationship amongst themselves, and the gang overcomes the bullies at the end only when they work together as one.

Some critics will say I’m looking too much into the premise, but one of the more underrated aspects about the Peanuts comics was how Schulz incorporated subtle sociopolitical themes into his storylines. It presented an interesting counter to more open strips like Doonesbury, and I feel that’s the case here.

Going to camp is a theoretically interesting premise that Schulz fills with his typical Peanut’s humor, charm, and dialogue, but I say theoretically for a reason: it doesn’t live up to its potential. Schulz, like most comic strip writers, was known for including reoccurring gags and tropes in his tales, but there’s a reason that’s more forgivable in a newspaper format: we’re getting short bursts in the daily lives of the Peanuts characters. When you have a long, single narrative, like with Race for Your Life, it means you’re going to get all of those aspects thrown in at once without the breathing room provided by a weekly format.

And don’t get me wrong, that’s perfectly fine- these characters should not radically depart from who they are. I’m just saying, for people who have been following Charlie Brown and his friends for some time now, Race for Your Life doesn’t do anything particularly special or at least visually unique the way The Peanuts Movie did in 2015. And let’s be clear, this is in no way the fault of the team who put this graphic novel together: they were simply translating a preexisting property onto a comic format.

No, my only gripe with Race for Your Life was the inherent problem created by Schulz’s no-adult set-up. For those who aren’t familiar, a common feature of the Peanuts comics was that you almost never saw the adults (and the Little Red-Haired Girl for that matter). And that continues into this adaptation where there are no camp counselors present, their voices instead being heard over an intercom. It presents an issue this time around because the three bullies (and their cat) that Charlie Brown and co. face are shown to be openly cheating at the various contests they participate in, whether it’s a tug-of-war or the river raft race that the narrative culminates in. Due to how open their sabotage is, it got progressively annoying to read them get away with it when any reasonable adult would’ve done something. And because it’s a core part of the story, I can’t overlook it.

Overall, though, that was my only botheration with Race for Your Life, Charlie Brown! Like I said in my review of the Dell Archive, the slice-of-life appeal of Peanuts makes it cross-generational. No matter the story, no matter the character, no matter the setting, you can always find something likable about this cast, and Race for Your Life fits that bill easily. And at $7-10 bucks SRP, this comic is an absolute steal.

At the end of the day, seeing Charlie Brown successfully get with a girl will forever be heartwarming in my eyes.