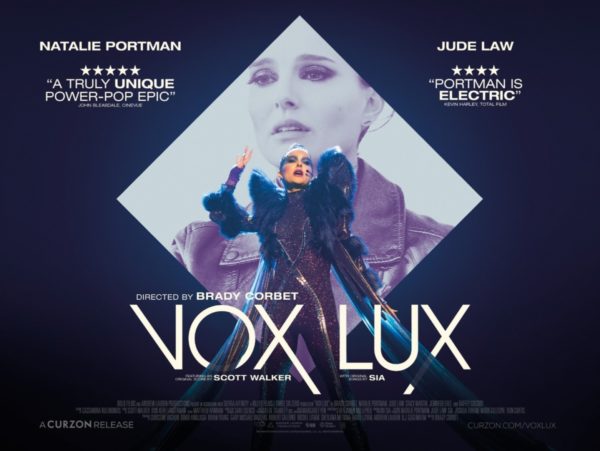 After surviving a school shooting, a young woman is blasted into the murky world of musical fame. 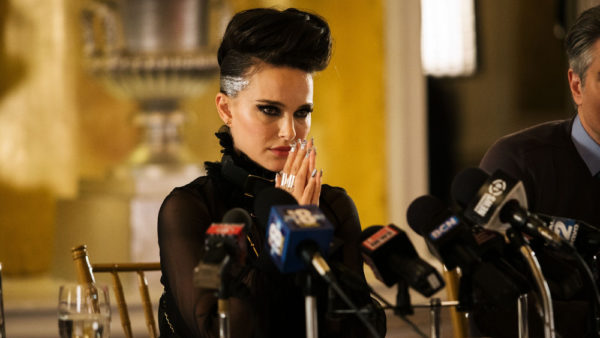 Films about emerging musicians are all the rage right now, with A Star is Born one of the most talked about awards season movies this year, Wild Rose currently battling to be seen among the superhero noise and Fisherman’s Friends providing a very Cornish perspective on the underdog story. Positioned squarely at the more arthouse end of that spectrum is Brady Corbet’s sophomore feature – the eccentric, eclectic, effervescent drama Vox Lux.

That title can be loosely translated to ‘Voice of Light’, which is a title that could certainly be applied to Celeste (Raffey Cassidy) when we first meet her in 1999. She survives a brutal shooting rampage in her high school and sings a raw, heartfelt tribute song alongside her sister Ellie (Stacy Martin) at the memorial service for her classmates. The song strikes a chord and soon a manager (Jude Law) is in place to shepherd Celeste to stardom. Almost two decades later, a different sort of tragedy creates a very awkward day for Celeste (Natalie Portman) as she prepares for a homecoming gig.

From a plotting perspective, Vox Lux is a fairly typical loss of innocence tale. Indeed, the first half of the movie deliberately concludes with the 9/11 terror attacks, casting them as a watershed moment for the protagonist and for society as a whole. “Her loss of innocence mirrored America’s,” states Willem Dafoe’s narrator, who is peppered throughout the film in sardonic and wry voiceover. Corbet, however, communicates this story through what essentially transpires as a series of vignettes and, every time the movie veers towards something that might be considered conventional, he pulls the rug. Sometimes, that’s with an unexpected plot development, or occasionally it’s by embracing the late Scott Walker’s oddball score – all staccato sci-fi synths and choral singing. 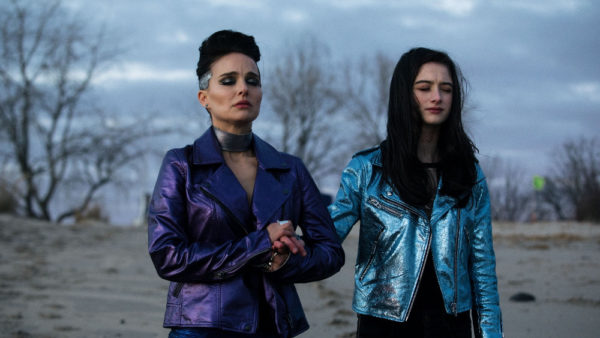 In the first half of the movie, Cassidy portrays the raw, unfiltered talent and star quality of Celeste perfectly, as she becomes a focal point for a whole town’s grief. When the narrative flashes forward to Portman’s Celeste – a sparkling Lady Gaga-esque pop princess – it becomes clear that the exact no-holds-barred personality that brought her to the top has become something of a liability in the intervening years. She’s prickly and angry at the world that has turned her into a commodity. I found myself reminded of an archive interview from Asif Kapadia’s Amy Winehouse documentary, in which the young singer says: “I don’t think I’m going to be at all famous. I don’t think I could handle it. I would probably go mad.” Fame corrupts, and not everyone is wired to handle that poison in their bloodstream.

Indeed, the entire film is about how modern society works instantly to commodify and compartmentalise anything that either is popular, or has the capacity to get there. In the intervening years between the first and second chapters of the film, Portman has become a jaded instrument of fame who refers to herself as “the new faith” and gets utterly smashed on a cocktail of substances with her manager – Law still, only made slimier and more exploitative through age. Her relationship with her daughter – played by Cassidy, in a neat touch – is sour and she has suffered all of the worst parts of fame. A violent meltdown is described in blackly comic deadpan by Dafoe.

But, if there’s a message of the film’s tightly concentrated second half, it’s that the show must go on. Portman is terrific in portraying Celeste as now more figure than human, with the ‘Voice of Light’ label now sadly ironic. She is still that voice, but only because her fans require it. She resents the fame as much as she relishes it, made starkly clear in a desperately tense roundtable interview scene that escalates to unbearable levels of discomfort. But this evaporates when Celeste steps on stage for a concert finale, allowed by Corbet to extend for at least 10 minutes. 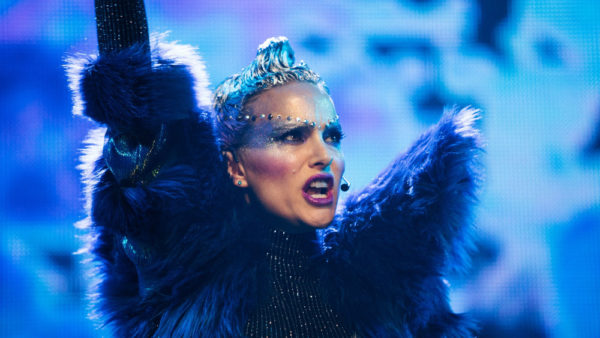 This finale is a mesmerising light show, in which Portman performs her heart out as if none of the previous events have taken place. She’s pure symbol, pure phenomenon and her lyrics about being “a private girl in a public world” are yelled back at her by adoring fans who have no idea of the true potency of those words. While the music and the performance is euphoric and energetic, there’s an exquisitely crafted sadness in the audience’s knowledge that this is now pure artifice, absent of passion or meaning.

In the glittering ashes of its final performance, Vox Lux emerges as an audacious and glittering celebrity hellscape in which Portman soars as the acid-tongued diva at its centre. It’s a role few would have pegged her for, but she seems born to play it.