Mobile gaming studio Jam City has announced the release of Disney Frozen Adventures on Android and iOS devices.  This 3D Match-Three puzzle game takes players back to the kingdom of Arendelle where they can join Anna, Elsa and Olaf in solving puzzles, decorating the castle and exploring a variety of locations inspired by Frozen and Frozen 2. 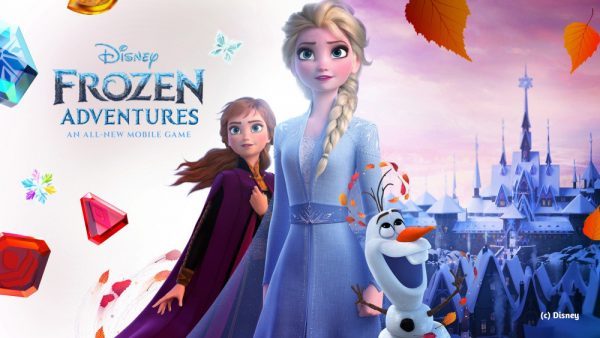 Disney Frozen Adventures is filled with lots of features that are bound to satisfy the most ardent of fans.  As well as solving match three puzzles, players will be able to decorate rooms in Arendelle’s castle as though they are in that room.  By creating an immersive point of view for the characters, players will be able to see everything they decorate from eye level, and pan around to see everything they’ve put up.

“Disney Frozen Adventures brings beloved characters Elsa, Anna, and Olaf to life in a new journey that allows players to design and explore the world of Arendelle while pushing the boundaries of game design to create a one of a kind adventure,” said Chris DeWolfe, co-founder and CEO of Jam City. “Collaborating with our friends at Disney on the globally beloved franchise has been a tremendous experience. With the continuing meteoric growth of mobile gaming, we hope to delight millions of fans with this interactive Frozen experience.”

“It’s a privilege to be able to create new experiences for fans inspired by the Frozen phenomenon,” said Sean Shoptaw, Senior Vice President, Games & Interactive Experiences at Disney Parks, Experiences and Products. “Jam City have proven their immense talent and passion for Disney’s characters and stories, and we’re delighted to be working with them to bring this accessible and fun Frozen experience to players around the world.”

Disney Frozen Adventures is available now on Google Play and the App Store.