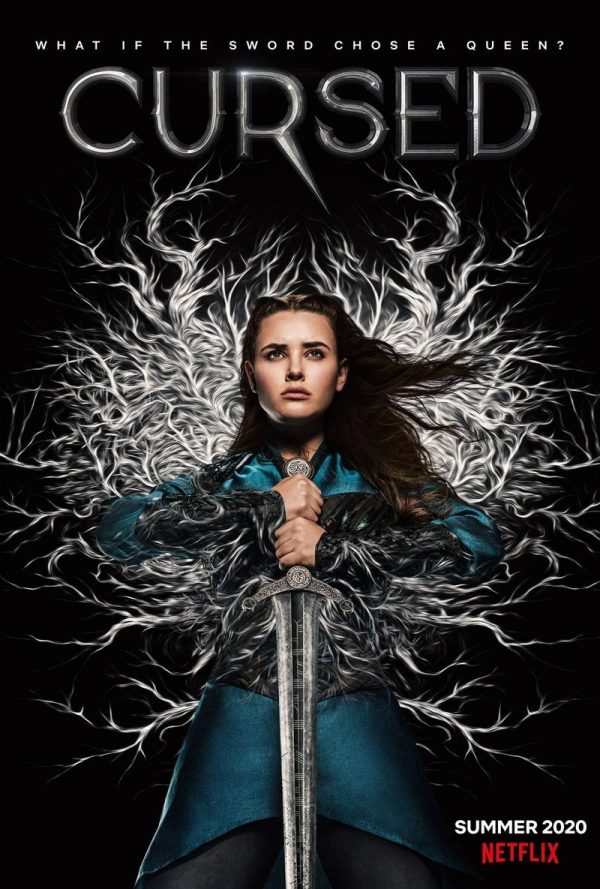 If the corpse of Guy Ritchie’s failed – yet actually quite entertaining – punk-rock blockbuster version of King Arthur is barely cold, there’s something to be said for a take on Arthurian legend which isn’t striving desperately for a multi-strand cinematic universe, and even dares to push the much-ballyhooed King to the middle-distance.

Cursed, adapted from Frank Miller and Tom Wheeler’s recent bestselling graphic novel, tilts the narrative lens away from Arthur (Devon Terrell) towards Nimue (Katherine Langford), a young outcast with mysterious magical powers, and who is eventually better known as the legendarily doomed Lady of the Lake.

In the fallout of her mother Lenore’s (Catherine Walker) demise at the hands of religious zealots the Red Paladins, Nimue teams up with young mercenary Arthur to deliver her bequeathed Sword of Power (aka Excalibur) to the wizard Merlin (Gustaf Skarsgård). Together, they plot to tear down the Red Paladins and the complicit, incompetent King Uther (Sebastian Armesto) – but what if Nimue wants to wield the sword for herself? 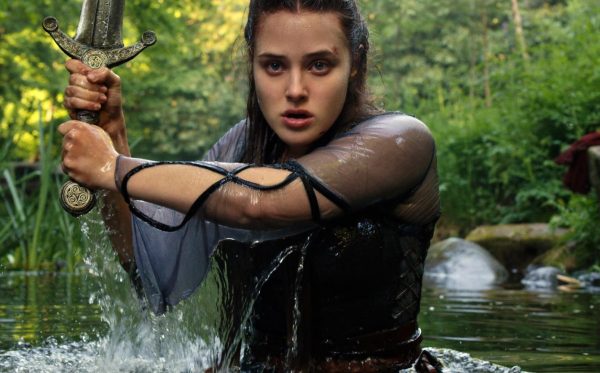 With theatrical audiences plainly stating their disinterest in big-screen King Arthur adventures with gargantuan budgets, a project with a more balanced scope which shifts the focus towards a peripheral figure is an inspired idea. Considering that the Lady of the Lake is typically tasked with gifting Arthur Excalibur, it’s an immediately neat switch-up that feels completely organic.

The overall outcome is a mostly compelling revision of well-trod, long-in-the-tooth lore; there are a number of smart re-configurations of the expected, even if the spine of the story should prove true enough not to offend the legend-faithful. Beyond Arthur basically becoming a supporting (yet pivotal) player, other expected Arthurian fixtures are introduced in canny and surprising ways – though we’ve been sworn not to reveal who.

But there are caveats, first and foremost that Cursed is categorically another Netflix series overstuffed with streaming minutes and not enough high-quality content to fill them. With 10 episodes running in the region of 50-60 minutes a-piece, it becomes clear by the show’s mid-point that it’s padded out with half-developed, mildly-interesting-at-best subplots intended to complicate a show which, at its core, is actually refreshing in its simplicity. 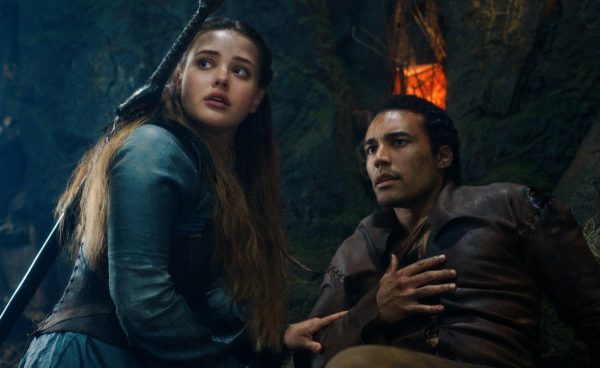 There is still a lot to be said for how easily digestible Cursed is compared to its natural genre siblings, especially Game of Thrones and The Witcher. If you’re craving something a little less mentally demanding than the Machiavellian politics of the former or the head-spinning time-hopping of the latter, this is a decidedly more low-maintenance affair, doing just enough to play with genre tropes in a subversive way.

There are some glaring tonal issues, however, and I constantly found myself close to verbalising, “Who exactly is this for?”. On the turn of a dime, the show’s tenor can shift from the flighty corniness of an earnest coming-of-age fantasy flick, to the gonzo slush of someone being violently mutilated. It’s a Frank Miller joint so brutality is to be expected, and the show certainly hits a trashily compelling stride when it lets loose with the body horror, but sometimes it’s a little too hasty to switch-foot between jaunty calm and, well, someone getting hollowed out with a sword.

Casting and performance are often what keep the seams glued together, though; rising star Katherine Langford acquits herself ably in the lead role of Nimue, an appealing combination of porcelain beauty and forthright strong-headedness. 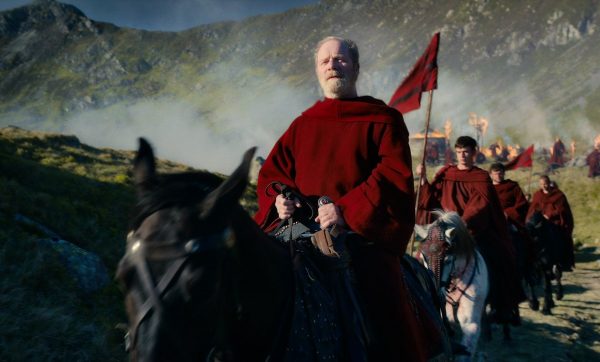 As a very typical Chosen One character, though, Nimue’s ultimately more of a monolith and less of an actual person than most of the peripheral characters, especially Arthur and Sister Igraine (Shalom Brune-Franklin), the latter a nun who offers Nimue shelter. Nevertheless, Langford’s a solid lead, and her chemistry with Terrell ensures the Nimue-Arthur romance doesn’t feel as arbitrary as it otherwise could.

Terrell meanwhile makes for an entertainingly self-serious half-parody of Arthur, while Peter Mullan is typically stellar as the pious leader of the Red Paladins, Father Carden. Mullan brings a quietly imposing quality to the fore, even if as a character Carden feels oddly underdeveloped for all the screen time he gets. Terrific character actor Richard Brake, who has single-handedly cornered the market as Hollywood’s go-to-creep, also shows up for a few episodes as one of Carden’s underlings, though is infuriatingly given little to do.

Without question the easy MVP of Cursed, then, is Gustaf Skarsgård as a boozed-up, strung-out, rock star rendition of Merlin. So charismatic is he in the role – being a Skarsgård and all – he wrestles every single scene he’s in away from anyone playing opposite, while offering up a singularly dynamic spin on the legendary wizard. He’s almost great enough to make you wish the series was centered on him instead – no offense, Nimue. 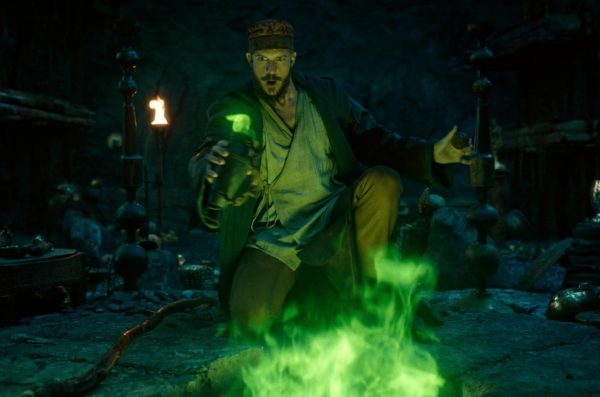 The show’s production values are generally of the expectedly glossy standard of most Netflix Originals; the stately 4K cinematography captures England’s natural beauty succinctly, even if shot selections often feel relatively unfussed, especially during some of the haphazardly staged and edited action sequences.

As with many other Netflix shows, inconsistency also abounds with the visual effects assortment, which ranges from impressively dense to verging-on-hideous, the latter with particular regard to its digital animals and an ambitious-yet-bungled set-piece in the season finale.

It’s not much of a spoiler to say that the season was clearly plotted out with a second go-around in mind, though regardless of whether that happens, Cursed operates tidily enough as a standalone one-off. If they can lop a couple of episodes off the season order and fix some of the offputting tonal issues, this could be another show which enjoys a quality uptick in its second volume. 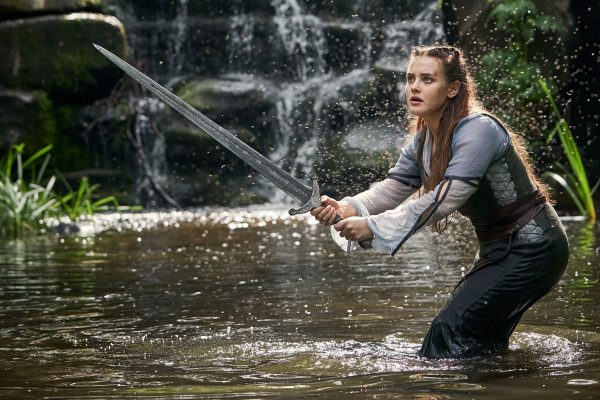 Bloated yet entertaining, Cursed carves out a uniquely weird kitsch-fantasy niche for itself, even if it doesn’t always quite know what it wants to be.