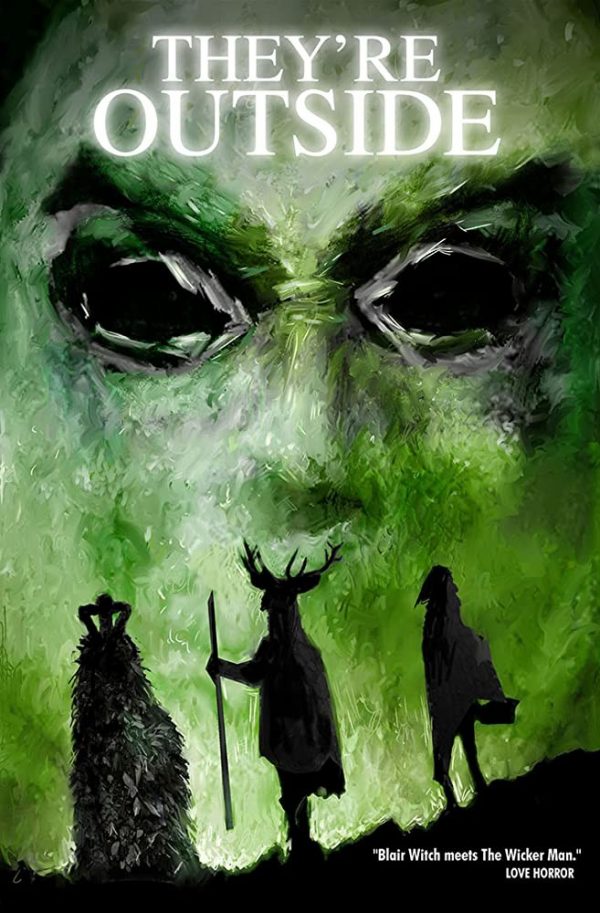 While filming a documentary about an agoraphobic woman, a celebrity psychologist is drawn into supernatural events.

For low-budget horror filmmakers, the found footage subgenre is one of the safer bets, and one that mostly serves directors Sam Casserly and Airell Anthony Hayles well here, even if They’re Outside ultimately doesn’t turn the screws quite tightly enough.

Presented as a documentary about an unaired YouTube video, the bulk of the film consists of celebrity psychologist Max Spencer (Tom Wheatley) hosting his YouTube show “Psychology – Inside/Out,” where he attempts to get an extremely agoraphobic woman, Sarah (Chrissy Randall), to leave her home within 10 days.

Vaguely reminiscent of the recent Antrum: The Deadliest Film Ever Made, They’re Outside offers up a brief introductory preamble – presented by folklore professor Richard Hill (Hellraiser’s Nicholas Vince) – and then leaves viewers to experience the uncut footage themselves, filled with “subliminal” images and unsettling Easter eggs as it is.

While certainly nowhere near as glossily conceived as Antrum, there is a gusto to the production that’s easy to admire. Clearly created on a shoestring budget – to the extent that much of the off-camera dialogue appears to be awkwardly, glaringly post-dubbed – it is nevertheless a solid attempt to be more than another me-too, cheap-as-chips found footage film.

What best separates this from its genre siblings is a less-desperate, more laid-back approach to scares, which while denting the overall atmosphere on occasion, allows the filmmakers to foreground characters and performance.

There’s an uncommon confidence here in both, with much of the film simply comprised of lengthy takes of people talking. More impatient audiences may feel frustration at the dialogue-dense approach, but the strength of the acting generally allows it to function as an effective, character-driven mood piece regardless.

Tom Wheatley is effortlessly convincing as the annoyingly smug YouTuber Max, yet as a character he’s nuanced enough to give Wheatley plenty of genuine dramatic meat to sink his teeth into later on; beyond his slick stature as a documentarian, he hides his own pain over a loss experienced in his own life. Genre vet Emily Booth is also an entertaining charmer and mild comic relief as Penny, a bohemian pal of Sarah’s.

But the easy show-stealer is Chrissy Randall as Sarah herself, the traumatised, agoraphobic woman at the center of the story, and whose fear of going outside is motivated by a past mired in its own tragedy. Her more emotionally fraught exchanges opposite Wheatley in particular suggest a film brimming with far more talent then its slight budget might imply.

Again, it’s fair to say that the atmosphere isn’t as thick and potent as you might hope for; some added ambient sound might’ve perked things up slightly, and only deep into the third act does it truly nestle into the creepy mode you’ve likely been waiting for. Without spoiling the final excursion, clever use of negative space combines with stellar acting and yes, an effective jump scare, to deliver a potent plunge into white-knuckle grimness.

Even at 83 minutes in length it sometimes feels a tad sluggish and over-encumbered with melodramatic subplots, yet this is still a solid calling card for its filmmaking duo. More than anything, it proves they can take a competent stab at the genre on a pittance and should probably be given more to work with next time.

More compelling as a well-acted drama than a straight horror, They’re Outside may not be scary enough, but it takes a hard swing with its minimal resources regardless.