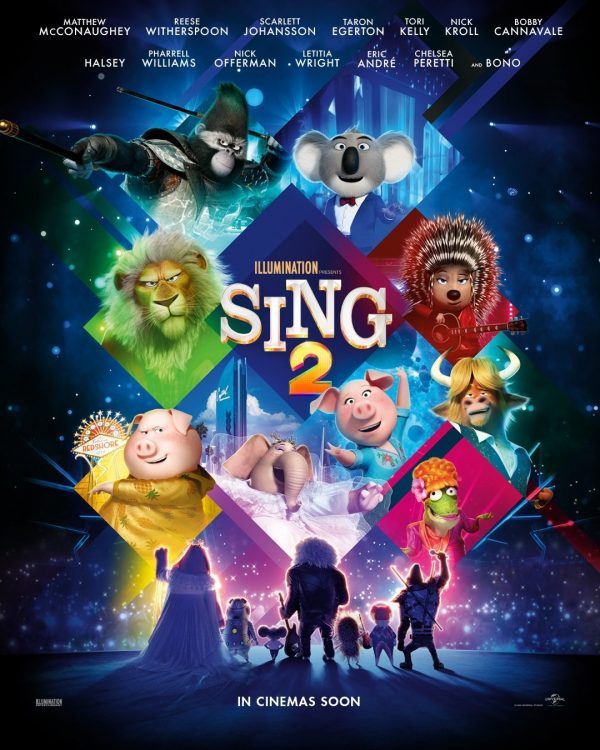 Buster Moon and his friends must persuade reclusive rock star Clay Calloway to join them for the opening of a new show.

Sing 2 accomplishes what should have been impossible; it still had me wanting to hurl myself out a window even when Billie Eilish was on the soundtrack. Maybe that seems like a harsh statement and unfairly cruel toward a harmless animated jukebox musical, but I actually found things to like in Garth Jennings’ (who does return as the director here) first Sing. That predecessor was still loaded with tunes spanning various decades and genres, but a respectable enough amount of care was put into developing the characters and their storylines.

The sequel is still written by Garth Jennings, although a notable difference between the two productions could explain a lot; Christophe Lourdelet no longer returns as a co-director. Perhaps the former is more concerned with, well, singing, and the latter was the one injecting the characters with some degree of personality. The original had a couple of moderately moving climactic performances, including one from a returning gorilla seeking acceptance from his family and overcoming stage fright voiced by Taron Egerton, which ended up feeling like a successful audition to play Elton John. There’s nothing remotely close to that here. 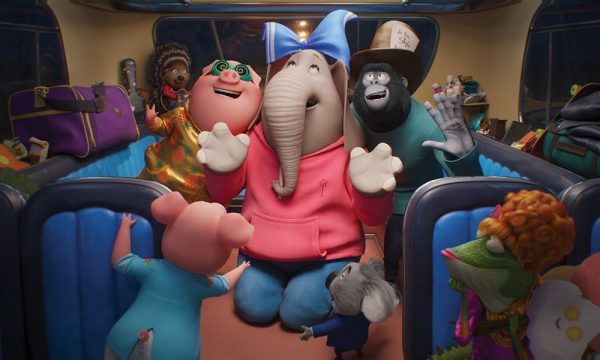 Actually, at the most basic level, it’s tough to get invested in Sing 2, which follows the theatre owner and koala Buster (Matthew McConaughey) comfortably running his business, putting on a baffling but sensory striking rendition of Alice in Wonderland. Naturally, the stars of that show are the animals that found their voice and stage presence in the first movie; housewife pig Rosita (voiced by Reese Witherspoon), casually dressed and shy elephant Meena (voiced by Tori Kelly), and the more eccentric oinker Gunter as forced by Nick Kroll. Porcupine Ash (Scarlett Johansson) also rejoins the group after disputing a venue manager over equal pay for one of her rock concerts. Additionally, Garth Jennings also returns the voice of the reptilian Miss Crawly, who oversees all aspects of production and serves as an assistant to Buster.

Big-city stageplay scout and dog Suki (Chelsea Peretti) is not impressed by this interpretation of Alice in Wonderland (to be fair, I had no idea what the hell was going on either), which spurs Buster into action, bringing along his band of anthropomorphic misfits to an admittedly visually pretty metropolis and barging into the building of wolf Mr. Jimmy Crystal (Bobby Cannavale). At first, he wants nothing to do with these animals either (not giving up on dreams is one thing, but there is something immediately offputting about Buster’s entitlement to put on a spectacle in front of more eyes), until the koala mentions the famed lion rock star Clay Calloway (U2 frontman Bono) and how he will be able to bring the legend out of reclusiveness to perform for the first time after the death of his lioness partner. So now we can add lying to the list of Buster’s misdeeds, and we aren’t even 20 minutes into the movie yet. The play in question is also a space opera that they have yet to flesh out and finish writing entirely. Even by the movie’s end, it’s hard to say what any of it is about beyond giving the musical numbers some visual razzle-dazzle. 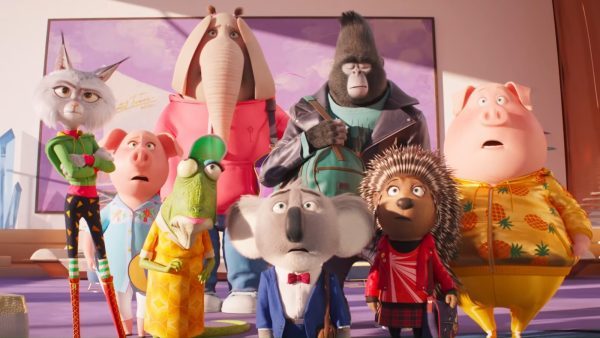 Truthfully, those are mere gripes that don’t matter in the grand scheme of who relentlessly and obnoxiously annoying Sing 2 is, spitting out 30 seconds of a song after song with no real narrative purpose. Frequently, characters will be getting to a somewhat intriguing conversation before being interrupted by a modern or classic popular tune, killing off any reason to become engaged in the numerous subplots each of the major stage performers splinters off in. It also provides the opportunity for recognizable names such as Eric André, Letitia Wright, and Halsey to voice some new characters, of which only Halsey has anything to do as the privileged, acrobatic but lousy actor that Jimmy Crystal forces Buster to give a role.

This time around, every character feels like an empty vessel for more music that never amounts to anything exciting or compelling beyond the superbly colorful and detailed CGI animation surrounding everything. Even as the story lets up on some of the music in the second half to get to the heart of Clay Calloway, the writing fails, leaving the only worthwhile thing here a brand-new song from Bono. It doesn’t play until the ending, and I sincerely doubt many viewers will get that far.