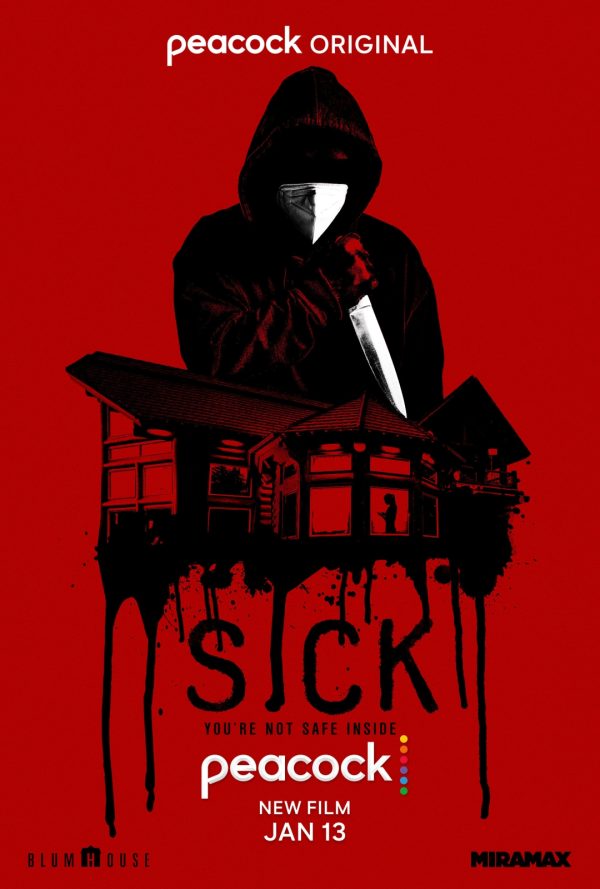 Due to the pandemic, Parker and her best friend decide to quarantine at the family lake house alone – or so they think. Whether or not enough time has passed to start making slashers that integrate COVID during the height of lockdown, panic, and uncertainty of how one gets infected is irrelevant, even if I don’t begrudge anyone that isn’t ready to watch those dark and isolating times mined for gory thrills in Sick.

Working with screenwriter Kevin Williamson (a legend of the genre known for Scream and I Know What You Did Last Summer), director John Hyams finds a twisted moral lesson among the brutality, transcending the lakeside home-invasion tension that falls somewhere between suspenseful and overtly telegraphed while running on too long. College students Parker (Gideon Adlon) and Miri (Bethlehem Million) skirt around April 2020’s lockdown protocols by making a getaway to the former’s aunt’s lake house. While they are friends, it’s immediately apparent they are treating the severity of the pandemic differently. Miri expresses a high scientific intelligence and is resourceful, whereas Parker is carefree and arguably careless, surprised her friend also wants her to wear a mask outdoors near one another.

It’s also concerning that Parker recently attended a wild party and was seen on social media making out with boys that are essentially strangers to her, but there are no COVID symptoms. As such, they are on their way for some peace and relaxation during stressful times. Shortly after arriving, Parker receives strange texts from a stalker who seems to have eyes on her specific location. She concludes that due to posting about the getaway on social media, it’s a jilted ex-lover playing pranks. Throughout this, the film also successfully establishes a believably tight bond between these friends despite their opposing personalities. Their lives may be simple and unremarkable, but the script and grounded performances find an authenticity there that quickly gets us rooting for their survival when danger strikes. The privacy between them is cut short once DJ (Dylan Sprayberry) shows up to bare his feelings for Parker and patch things up.

From there, a masked murderer enters the picture, executed in a manner that has one analyzing the characters (both on-screen and offscreen name drops) to figure out the identity, as if it’s Scream set during COVID. However, the middle stretch subverts that by transforming the situation into an extended chase directed with clarity and intensity while using the entirety of the lakeside home and its surroundings. John Hyams is having a blast constructing these set pieces (cinematographer Yaron Levy captures some artfully striking shots fixating on the violence), and they are entertaining to watch even if plenty of the jump-scare moments are obvious, but it begins to feel like a routine home invasion movie that forgets what is separating it apart from the rest of the genre.

As creatively bloody and slickly directed Sick is, it doesn’t find its footing again until embracing a mean-spirited nastiness and bonkers social commentary that re-contextualizes the past hour. The motives are utterly unhinged but scarily relatable and will unquestionably be too much for some viewers, even if the film was meant to be taken as genre fun.

The last 20 minutes are gleefully chaotic, primarily because Sick uses COVID life to flip the script in multiple ways. It’s a rousingly sick hoot, even through its flaws.

Robert Kojder is a member of the Chicago Film Critics Association and the Critics Choice Association. He is also the Flickering Myth Reviews Editor. Check here for new reviews, follow my Twitter or Letterboxd, or ema