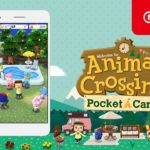 Nintendo have announced the first Animal Crossing game for iOS and Android devices which is set to arrive next month.  Titled Animal Crossing: Pocket Camp players will build up and manage their very own campsite.  Watch the trailer below for more details on the debut of the franchise onto mobile… Animal crossing fans will be in their element […]

Nintendo’s next two mobile titles, based off of their popular IPs Animal Crossing and Fire Emblem, will be free-to-play, the Japanese company has confirmed. Both of the titles will instead make use of microtransactions. The free-to-play model was confirmed by DeNA boss Isao Moriyasu and a Nintendo spokesperson. These new titles are part of a […]

Nintendo appears to have accidentally leaked yet another announcement ahead of their E3 showing on Tuesday – the existence of Animal Crossing and Mario Maker amiibo. The image above is currently available on Nintendo of Europe’s official website. The image seems to reveal official, actual NFC figures of characters like Tom Nook and K.K. Slider […]