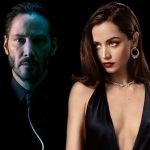 It’s a busy time for the John Wick franchise, what with the fourth movie incoming this year alongside the three-part limited series The Contintental, but the action doesn’t stop there as cameras are currently rolling on the series’ first big screen spin-off, the Ana de Armas-led Ballerina. The film is in production now under director […] Legendary actor Gabriel Byrne is checking into The Continental and joining the world of John Wick as The Usual Suspects star has become the latest actor to join the cast of Ballerina, the upcoming spinoff film currently in production under filmmaker Len Wiseman, who is directing the project from a script written by Shay Hatten. Byrne […] Now that he has a little time out from grunting his way around Georgia on a motorcycle as The Walking Dead‘s Daryl Dixon, or being motion-captured for Hideo Kojima’s Death Stranding 2, Norman Reedus has joined the ever-expanding cast of John Wick Spinoff Ballerina.  Deadline reveals that Reedus will star in the Ana de Armas-led […]

With John Wick: Chapter 4 and The Continental fast approaching, the John Wick franchise looks to expand with a new Ana de Armas-led film, Ballerina. With production now underway, the man behind John Wick, Keanu Reeves, is opening up about the spin-off movie and what his Knock Knock and Exposed co-star de Armas will go […] The John Wick spin-off Ballerina starring Ana de Armas (No Time To Die) will see another familiar face from the John Wick universe as Lance Reddick will reprise his role as the Continental’s concierge Charon. “Charon is an indispensable part of the world of Wick,” said Ballerina producer Erica Lee. “It’s great to know that Lance will continue to make his […] Anjelica Huston is set to make her return to the John Wick universe, with the actress signing on to reprise her John Wick: Chapter 3 – Parabellum role as crime lord The Director in the Ana de Armas-led spinoff Ballerina. The film is in production now, with Len Wiseman (Underworld) directing from a script by […] Earlier this week it was revealed that Ian McShane was set to reprise his role as Winston, the manager of The Continental Hotel, in Ana de Armas’ John Wick spin-off Ballerina, and now comes the news that Keanu Reeves, aka John Wick himself will show up in the film.  Ballerina is currently filming in Prague […] Following her scene-stealing turn in No Time to Die the idea of watching Ana De Armas as a revenge seeking assassin should be enough to guarantee interest in John Wick spin-off Ballerina. Yet now we get the equally exciting news that Promising Young Woman‘s Emerald Fennell has been hired to help write the script for […] Fresh off starring in the latest James Bond film No Time to Die, Ana de Armas may be getting ready for another iconic action franchise as Deadline reports she is currently in talks to star as the lead in the John Wick spin-off Ballerina. Ballerina will follow “a young female assassin who seeks revenge against the people who […]