Marvel continues its countdown to Natasha Romanoff’s solo movie this coming Wednesday with the release of the second and final issue of the Black Widow Prelude comic book; check out a preview here… THE HUNT FOR THE BLACK WIDOW! Follow the trail of NATASHA ROMANOFF’s exploits in the Marvel Cinematic Universe! As the facts are […] 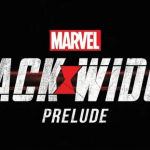 As is customary with many of Marvel Studios’ movies, the upcoming Scarlett Johansson-led Black Widow film is set to receive a comic book lead-in from Marvel with a two-part Black Widow Prelude from writer Peter David and artist Carlos Villa. The solicitation for Black Widow Prelude reads: TRACE THE BLACK WIDOW’S HISTORY IN THE MARVEL […]