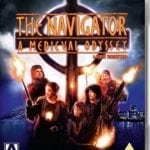 The Navigator: A Medieval Odyssey, 1988. Directed by Vincent Ward. Starring Bruce Lyons, Chris Haywood, Hamish Gough, Sarah Peirse, and Marshall Napier. SYNOPSIS: Villagers in 14th century England attempt to escape the Black Death by digging a hole to the other side of the Earth, emerging in 20th century New Zealand. In a decade that […]