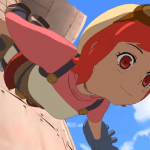 Netflix has released a teaser trailer for its Original sci-fi anime Eden, which is directed by acclaimed animator and director Yasuhiro Irie, whose credits include Fullmetal Alchemist, Cowboy Bebop and Mobile Suit Gundam; take a look at the trailer here… Set in a far off future and a world which has been inhabited by robots […]

Back on the 22nd May, WWE shockingly announced that Cody Rhodes had been released from his contract. Rhodes later explained that he was frustrated with his creative direction in the company and wanted out. Just a few days later, his wife Brandi Rhodes – who worked as the WWE announcer Eden – also left the […]

The launch of Channel 4’s latest television show Eden asked the question, “What if we could start again?”. Well now you’re going to be able to find out as launching on the App Store, Google Play Store and also the Amazon AppStore is Eden the game. Here you’ll be responsible for your own virtual community, […]

Ahead of its UK release next month, a brand new poster and trailer have been released for the acclaimed clubbing film Eden, which you can check out right here… Highly acclaimed for being one of the most heartfelt and representative films ever made about clubbing and electronic music, Mia Hansen-Løve’s Eden tells the story of […]