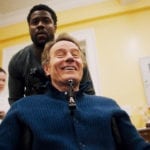 Despite the rumour that the Limitless television series was being shopped around to other networks, it is now confirmed the freshman series has been cancelled. Writer and producer Craig Sweeney took to Twitter to announce the news, saying “I’m truly sad to report #Limitless will not continue on any platform. Thanks so much to everyone […]

It looks like Supergirl fans can get set for more adventures with Melissa Benoist’s Kara Zor-El, as CBS CEO Les Moonves suggesting today that the network is planning to renew the DC series for a second season. “We have about five new shows on this year,” said Moonves at the Deutsche Bank Media, Internet & Telecom Conference. “Of […]

FLICKERING MYTH DAILY – LONG READ SPECIAL Because Oli is eating his bodyweight in Danish bacon right now (he’s gone for a city break in Copenhagen), here’s a prerecorded long-read of Neil Calloway’s Flickering Myth article ‘The Movies that Should be TV Shows’. Television used to be seen as a step-down from cinema. Now it’s […]

This week, Neil Calloway suggests some films that would work well as TV shows… With the new series of Agents of S.H.I.E.L.D. now underway, the Limitless TV show having just debuted in the US, and talk of a Game of Thrones movie being made (later denied). There’s even a TV show (the second, following a […]

Coinciding with the news that CBS has secured the services of Bradley Cooper for its upcoming Limitless TV sequel, with the Oscar nominee set to feature in a recurring role for around four of five episodes of the first season, the network has released the first trailer for the series, which you can see below… […]

Last week it was announced that CBS has ordered a pilot for a TV series based upon the 2011 thriller Limitless, and now the network has secured a director in Marc Webb (The Amazing Spider-Man). Webb will take over from Neil Burger, director of the original movie, who has had to drop out of helming […]

Following on from the news that it has placed a pilot order for Rush Hour, CBS looks to be bringing another movie to the small screen, having picked up the pilot for an adaptation of the Bradley Cooper-headined thriller Limitless. The pilot is being written by Craig Sweeny (Elementary, Medium), who is set to executive […]