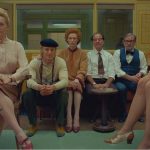 Searchlight Pictures has debut the first trailer for writer-director Wes Anderson’s star-studded comedy drama The French Dispatch, which brings to life a collection of stories from an American magazine published in a fictional 20th century French city; watch it here… The French Dispatch is set for release on July 24th in the US and on […]