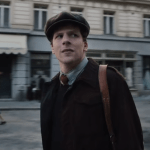 IFC Films has released a trailer for the upcoming drama Resistance. Written and directed by Jonathan Jakubowicz, the film tells the story of Marcel Marceau (Jesse Eisenberg) before he became a world-famous mime and explores his work with the French Resistance during World War II. Joining Eisenberg in the cast are Ed Harris, Clémence Poésy, […]