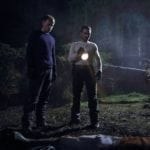 Ahead of its arrival on Netflix later this month, the streaming service has released a trailer for writer-director Matt Palmer’s upcoming thriller Calibre which stars Jack Lowden, Martin McCann, Tony Curran, and Ian Pirie; watch it here…. During a weekend in the countryside, two old friends make a terrible decision. Now someone – or perhaps both […]