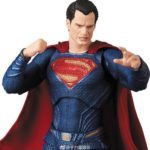 Medicom has released official promotional images for three of its upcoming six inch Justice League MAFEX action figures, based on the appearance of Batman (Ben Affleck), Superman (Henry Cavill), and The Flash (Ezra Miller) from the upcoming DC blockbuster. The figures are expected to hit between March and April of next year; check them out here… […]

Diamond Comic Distributors and Medicom have revealed their latest PREVIEWS Exclusive Godzilla vinyl figure which is based on the image of the King of the Monsters from 1962’s King Kong vs. Godzilla. the collectible is set to go sale in October, priced at $59.99.’ take a look below… Based of Godzilla’s appearance in the 1962 film […]

Medicom has revealed promotional images for its upcoming MAFEX Spider-Man action figure which is based on Tom Hollan’s wall-crawler from Spider-Man: Homecoming. The toy stands at six inches tall and comes with a range of accessories that includes two masked and an unmasked head sculpt, interchangeable hands, a web piece, and an adjustable stand; check it […]

After debuting their Dark Knight and Man of Steel action figures back in November [check out promotional images here], Medicom has now unveiled its Wonder Woman MAFEX figure from March’s big DC ensemble Batman v Superman: Dawn of Justice.   The figure stands approximately 6 inches tall, and comes with a sword, shield and Lasso […]