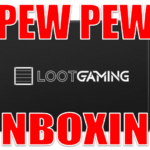 This month’s Loot Gaming Crate is titled “Pew Pew”.  Fighting the forces of evil is never easy, but with an added touch of onomatopoeia you can do it with a smile.  “Pew Pew” celebrates the anniversary of Overwatch, it aims its arm cannon at the Metroid universe and brings you a touch of light from […]

Not content to just campaign to play Carol Danvers/Captain Marvel in Marvel’s Cinematic Universe, former UFC champion Ronda Rousey is now looking to take on another iconic role. “I’ve always wanted to be Samus,” Rousey told Gamespot. “That would be badass. I love how people found out later that it was a hot chick on the […]

Nintendo is unlikely to launch a new home console Metroid game until the release of its newest dedicated games platform, NX. Speaking to Eurogamer, Kensuke Tanabe, the series producer for Metroid Prime, said: “If we started for Wii U now, it would likely take three years or so. So it would likely now be on Nintendo’s […]

If you’ve been following the colossal hype surrounding the release of Super Smash Bros. for Wii U at all, you’ll know that Mewtwo was one of the most requested veterans of all time. While that dream has been realised, one, perhaps even more requested dream, has not. Ridley, the villainous space pirate from the Metroid […]