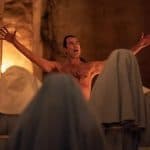 Showtime has announced that it has swung the axe on the Penny Dreadful spinoff series City of Angels after just one season. “We decided not to move forward with another season of Penny Dreadful: City of Angels,” reads the official statement from the cable network. “We would like to thank executive producers John Logan, Michael […] With a little over a month to go until the premiere of Penny Dreadful: City of Angels, a new featurette has been released for the spinoff which takes us behind the scenes of the fantasy horror series and includes interviews with stars Natalie Dormer, Daniel Zovatto, and Nathan Lane; watch it here… SEE ALSO: Penny […] Thanks to Entertainment Weekly, we’ve got a first look at Game of Thrones alum Natalie Dormer in the upcoming Penny Dreadful spinoff/spiritual successor City of Angels, where she portrays the shape-shifting demon character Magda. Dormer describes her character in the series as a “delicious, multi­dimensional thrill,” an “agent of chaos” out to “sow the seeds […] The upcoming Penny Dreadful spinoff City of Angels has added Golden Globe-nominated actress Piper Perabo, with THR reporting that the Covert Affairs star has been cast in a recurring role in the Showtime series. Created by John Logan and described as a “spiritual descendant” of Penny Dreadful, series will take place in pre-WWII Los Angeles, […] As Showtime prepares its Penny Dreadful sequel spin-off City of Angels, the show has just cast six actors to the series in various lead and recurring roles. Michael Gladis (Mad Men) and Lorenza Izzo (Once Upon A Time in Hollywood) have joined in series regular roles while Ethan Peck (Star Trek: Discovery), Thomas Kretschmann (Avengers: Age […]