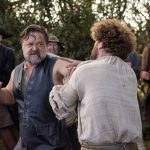 With a little over a week to go until Prizefighter arrives on Prime Video, a new poster has been released for the biographical drama along with a clip which sees Russell Crowe’s former boxer Jack Slack involved in a brutal fight as his young grandson, future Champion of All England prizefighter Jem Belcher, watches on; […]

A trailer and images have been released for the biographical drama Prizefighter, which tells the story of Jem Belcher as he becomes the youngest ever world boxing champion at the turn of the 19th century. Directed by Daniel Graham, the film stars Matt Hookings as Belcher, alongside Russell Crowe, Ray Winstone, Marton Csokas, Jodhi May, […]