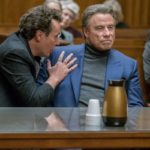 The Devil’s Candy, 2015 Directed by Sean Byrne Starring Ethan Embry, Shiri Appleby, Kiara Glasco, Pruitt Taylor Vince SYNOPSIS: A metalhead painter and his young family find themselves stalked by satanic forces after moving into a derelict house in the countryside. You only have to look as far as last year’s Deathgasm, Brutal Legend or […]

With just a under month to go until its release, IFC Midnight has released a trailer for writer-director Sean Byrne’s upcoming horror The Devil’s Candy which stars Ethan Embry, Shiri Appleby, Kiara Glasco, and Pruitt Taylor Vince; check it out below after the official synopsis… A not-so-average family wrestles with Satan in a house from […]