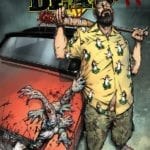 Road of the Dead: Highway to Hell #2 hits comic book stores this coming Wednesday, and you can take a look at a preview of the issue here courtesy of IDW Publishing… An over-the-top wild ride prequel to ROAD OF THE DEAD! Written by Jonathan Maberry, New York Times bestselling author and creator of V-WARS. […] 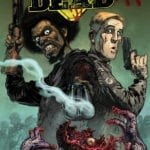 Prior to his death last year, George A. Romero announced that he’d been developing a new instalment in his Dead series, Road of the Dead, which he described as “The Fast and the Furious with zombies”. The film was to be directed by Romero’s longtime collaborator Matt Birman, but sadly he passed away soon after, leaving the […]

Back in May it was announced that legendary filmmaker George A. Romero is set for a return to the zombie genre with Road of the Dead, which he is producing and writing with Matt Birman, second unit director on Land of the Dead, Diary of the Dead and Survival of the Dead., who will also helm the film. And […]

HARDY VENOM Announced back in March, Sony are pushing forward with their R-rated Venom spin-off movie by revealing that Tom Hardy (The Dark Knight Rises) will be putting on the symbiote suit with Ruben Flischer (Zombieland) directing. The movie goes into production this Fall, and will not be a part of the Marvel Cinematic Universe. […]

Back in November of last year, filmmaker George A. Romero revealed that he’d called time on the zombie genre, feeling that The Walking Dead and World War Z “just sort of killed it all”. Well, it seems the man behind the classic Night of the Living Dead has now had a change of heart, as […]