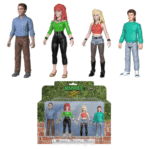 On this past weekend’s episode of Saturday Night Live, Adam Driver reprised the role of Kylo Ren for a sketch where the Master of the Knights on Ren took part in Undercover Boss, posing as Matt the radar technician to investigate the inner workings of the staff on Starkiller base [watch the sketch here]. Well, […]

Over the weekend, Adam Driver hosted the latest episode of Saturday Night Live, during which he featured in a sketch where he revisited his Star Wars: The Force Awakens character Kylo Ren, as the Master of the Knights of Ren took part in Undercover Boss, posing as Matt the Radar Technician to find out how […]

While many great sketches and shorts made it to air during the 40th season of Saturday Night Live, for fans of both The Office and The Hobbit, perhaps none were quite as funny or memorable as The Office: Middle Earth, otherwise known as Hobbit Office. Now, bonus footage from the sketch has been released on the […]

Saturday Night Live alumni Tina Fey and Amy Poehler are back together in the first full-length trailer for Universal’s Sisters. Check it out… Fey and Poehler have worked together on numerous films and projects over the years, including Mean Girls, Baby Mama and Anchorman 2: The Legend Continues. They also co-hosted the Golden Globes together […]

Last night SNL gave us its own take on the immensely popular HBO series, Game of Thrones.  The spoof depicts an eighth kingdom called South Centros, inspired by the 1991 John Singleton film, Boyz ‘n the Hood. During the mock episode we find out that South Centros is at war with the Lannisters and that Ice Cube […]

It seems like everywhere you looked on the internet these past few weeks you just can’t get away from the Sony hack scandal. A few days ago Sony decided to cancel The Interview completely which provoked an explosive reaction from movie fans and celebrities on Twitter. During the opening segment of last nights Saturday Night […]

After the recent UK release of The Hobbit: The Battle of the Five Armies and the upcoming U.S. release scheduled for next Friday, SNL have put together a sketch which sees cult classic The Office meeting the much loved fantasy world of Middle-earth. The sketch aired as Martin Freeman (The Hobbit, Fargo, The Office and Sherlock) hosted […]

After the many satires and spoofs surrounding the new Star Wars: The Force Awakens trailer it seems Saturday Night Live are also riding the wave and have delivered their own humorous take on the teaser. Seeing as the original trailer doesn’t include any appearances from iconic actors Harrison Ford, Carrie Fisher and Mark Hamill, SNL […]