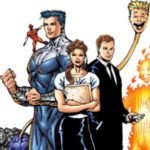 Deadline is reporting that Sony is moving forward with a feature film adaptation of Shrink, a webcomic series from Deadpool co-creator Rob Liefeld, which revolves around Dr. Jessica Powers, a female psychiatrist with superhero clientele. The project is being produced by Liefeld, Doug Belgrad (Charlie’s Angels) and Adam Fields (Donnie Darko), and is described as […]