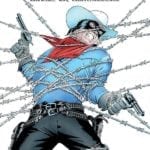 The Lone Ranger is set to make his return to comic books this October courtesy of Dynamite Entertainment, and we’ve got a first-look preview of the debut issue for you here; check it out… A sparking new adventure from multiple Eisner Award nominee MARK RUSSELL (The Flintstones) and BOB Q (The Green Hornet ’66 Meets […]

Anthony Stokes on race and superhero movies… Michelle Rodriguez made some comments about race swapping in comic book movies over the weekend, which she later went back and clarified, but the general gist was for minority actors to “stop stealing roles from white people”. Because there are so many white actors and actresses starving for […]