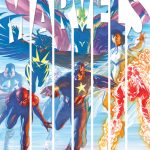 Marvel has announced that acclaimed writer Kurt Busiek and artists Yildiray Cinar and Alex Ross are teaming for the star-studded new ongoing series The Marvels, which is described as “the most sprawling series ever to hit the Marvel Universe” and will feature everyone from the publisher’s very earliest heroes to its newest stars. “The whole […]