Despite a petition that reached the millions in terms of signatures,  Warner Bros. stood firm with its decision to retain the services of Amber Heard for Aquaman and the Lost Kingdom despite all of the negative publicity surrounding her very public legal issues with ex-husband Johnny Depp. However, if a new report from Just Jared […]

During her ongoing trial with Johnny Depp, Amber Heard has claimed that her role in Aquaman and the Lost Kingdom has almost disappeared. Despite a petition calling for her removal from the sequel to DC’s 2018 smash hit having attracted millions of signatures, producer Peter Safran stated last year that firing Heard from Aquaman 2 […] 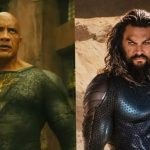 Warner Bros. just dropped a new sizzle reel of their 2022 film slate with a tease of things to come. During the preview, fans got their first look at new heroes like Doctor Fate and Hawkman from Black Adam while also showing newer looks at The Flash, Aquaman and the Lost Kingdom and The Batman. […] Having kicked off principal photography this past June, Warner Bros. and DC Films’ Aquaman and the Lost Kingdom has now wrapped its production, with director James Wan taking to Instagram to mark the occasion with a photo from the Malibu set of the superhero sequel alongside stars Jason Momoa (Aquaman) and Patrick Wilson (Orm). “A […]

Barring any pandemic-related delays, Jason Momoa’s Arthur Curry will be back on the big screen this time next year as Warner Bros. releases DC Films’ aquatic superhero sequel Aquaman and the Lost Kingdom, and the studio has just dropped an official synopsis for the James Wan-directed film. “When an ancient power is unleashed, Aquaman must […] Director James Wan has revealed that the now-cancelled Aquaman spinoff titled The Trench was secretly a DC Extended Universe film focusing on the villain Black Manta – who was first introduced in 2018’s Aquaman. Responding to a question from a fan on his Instagram account, Wan confirmed the true plans for The Trench movie after the project was shelved […]

Following its presentation at DC FanDome this past weekend, director James Wan has shared two new images from the set of the upcoming sequel Aquaman and the Lost Kingdom which offer look at the updated suit that Yahya Abdul-Mateen II’s Black Manta will be sporting for his rematch with Jason Momoa’s Arthur Curry; check them […] Jason Momoa is currently reprising the role of Arthur Curry as production on Warner Bros. and DC Films’ Aquaman and the Lost Kingdom continues in the UK, and the star has taken a break from filming to hype up the sequel to the 2018 blockbuster, promising bigger stakes, bigger laughs and bigger action. “It’s exciting […]