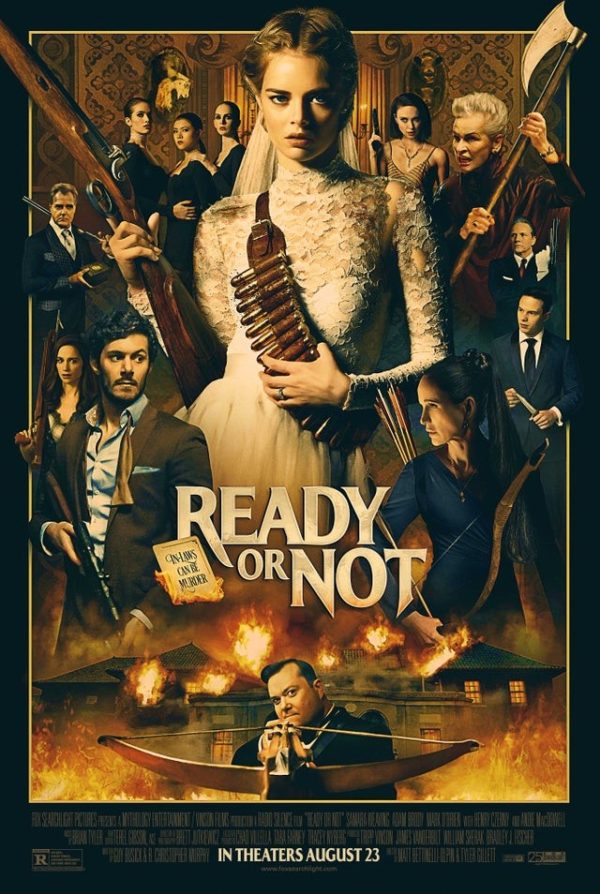 A bride’s wedding night takes a sinister turn when her eccentric new in-laws force her to take part in a terrifying game. You are not ready for Ready or Not, a darkly satirical takedown of the deeper meanings behind marriage to where the rich dispose of average citizens for their own warped pleasure, all while scathing attacks on gun violence. This is a movie where traditional white wedding dresses take on new purposes such as strangling a psychopathic attacker and one where every member of the demented family of killers has some kind of firearm, with none of them actually knowing what they are doing. I couldn’t even tell you if it was the same person every time accidentally killing one of their own; I was too busy laughing so hard to pay attention to who actually killed who. The film also isn’t afraid to turn this logic around on our bride-to-be possibly murdered, who does not have much luck either when acquiring a rifle.

Ready or Not is coming out of nowhere as one of the surprise hits of the year, especially considering the talent behind the project didn’t really suggest anything to be excited about. It’s helmed by Matt Bettinelli-Olpin and Tyler Gillett, the directing duo of recent January dud Devils Due and a pair of unproven writers (Guy Busick and Ryan Murph). Both teams have got great chemistry going on; the writing is wickedly funny filled with one-liners whereas the story itself is unpredictable, and the direction is crafty making use of a well-designed masion with aesthetically pleasing candlelit lighting. Part of the premise is that this insane superstitious family genuinely believes that bad luck and death will be brought upon the entire family if they fail to kill the bride in a game of hide-and-seek before the sun comes up. It’s explained more in the movie, but if hide and seek is chosen by chance as the game of the night, it quickly morphs into something deadly and murderous. If only the Old Maid card had been drawn… Nevertheless, Ready or Not balances this perfect tone where it’s difficult to ever really be sure if something paranormal is going to happen or if the movie is building towards one giant punchline against the stupidity of this family and how gullible they are. Rest assured, the climax is a series of ingenious moments that largely stick the landing (I’m still not sure if one particular character acts out of character or not, but I’m leaning towards a no), although it probably goes on for one scene too long. That’s also one of the only gripes to have with the entire movie; you really have to nitpick to find anything wrong with this one, unless for whatever reason you just can’t get on the wavelength of its twisted humor mixed with over-the-top gore and social commentary.

This playfully sinister tone is established early on; characters are self-aware of their horrible nature calling each other soulless, a grandmother looks on at the ceremony with resting bitch face, and at the center of it all are Grace (Samara Weaving, who goes for broke screaming her head off reacting at the sickening sights of everything going on, delivering what has to be one of the best mainstream horror performances of the decade) and Daniel (Mark O’Brien), the former of which has no idea that her husband’s filthy wealthy family has an initiation process involving board games (there is an exposition dump explaining why they do this) that could spell certain doom for her. Daniel does not have a good reason by any means for playing ignorant of the whole situation in front of Grace until it’s a game-time, but even his reasoning of fearing that he would lose the love of his life over the behavior of his family is somewhat relatable. He’s a boneheaded jerk, but you also feel something for him when he explains to her the situation and professes his love. Again, the numerous ways the carnage informs thoughts on marriage are actually intelligent. The violence is both for the sake of violence yet also imaginative; if someone is graphically wounded you can expect that it will come back into play at some point during the movie. Sure, you have an elderly woman chopping off heads of with a battle-ax and guns literally blowing apart people’s faces, but there are also moments where body horror becomes necessary for survival. And if you’re not entirely sure what that means, you will certainly understand upon witnessing a nasty bit of peril that is sure to cause wincing and shrieking throughout the entire auditorium.

The narrative does not waste any time getting to the game of hide-and-seek either, it’s eager to get the actual marriage over with as soon as possible and dole out the necessary details before jumping right into what has to be at least 80 minutes of propulsive momentum. The danger never lets up as conversations are kept to a minimum, lasting only as long as they need to for character development. A good chunk of these villains are interchangeable, but for the most part, they all have a distinct personality that can be latched on to as far as desiring them to get their comeuppance. And again, the ending is flat out bonkers. Ready or Not is gloriously, deliciously fucked up.