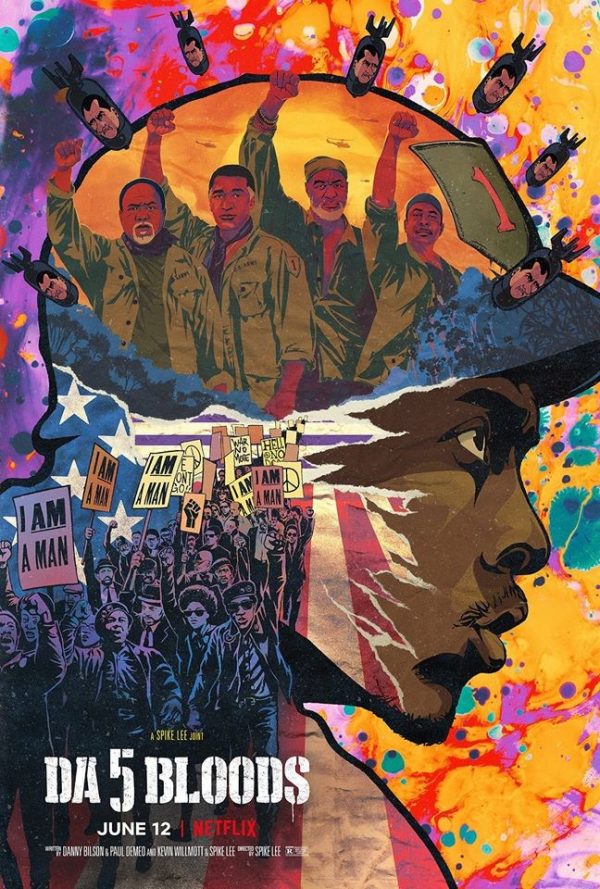 Four African-American vets battle the forces of man and nature when they return to Vietnam seeking the remains of their fallen squad leader and the gold fortune he helped them hide. 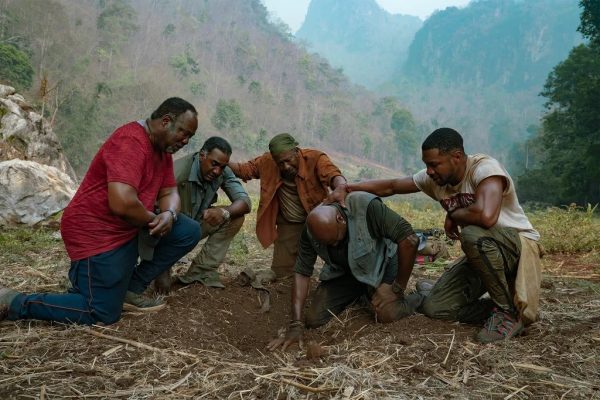 It’s tough to think of a better-timed film release in recent memory than Spike Lee’s new war drama Da 5 Bloods. Though if we’re being honest, is there ever really bad timing for a film tackling the ever-present and vitally urgent issue of black disenfranchisement? Lee’s sprawling epic considers the spoils of war and the true meaning of reparations – both material and spiritual – with potent conviction, even if the director’s own expected excesses sometimes get in the way.

Da 5 Bloods follows four aged, black American veterans of the Vietnam War (Delroy Lindo, Clarke Peters, Norm Lewis, Isiah Whitlock Jr.) who return to the country in order to retrieve both the remains of their squad leader (Chadwick Boseman) who died in battle in 1971, and also a massive stash of gold bars they buried in the area. But due to a napalm strike having destroyed the landmarks they used to track the treasure, finding it – and moreover, getting it home – won’t be easy.

Lee’s film opens with one of his signature stirring archival montages, powerfully juxtaposing footage of decimated Vietnamese citizens opposite the racial abuse of black people in America. It’s a strong mission statement from minute one, drawing a line of causation across non-white suffering while pointing a finger at the common force responsible; the white man, and moreover, the white establishment.

Indeed, this is far more than a straight-up anti-war film, using dark comedy to critique a global culture which has effectively commodified the Vietnam War in particular into a cool, even “sexy” spectacle to be glamorised in mass media.

There’s no better visual marker for this than an early scene in a nightclub, which shows an Apocalypse Now poster set behind a gigantic neon advertisement for Budweiser beer. Later, Wagner’s “Ride of the Valkyries” – memorably deployed during Apocalypse Now‘s horrific gunship assault of a Vietnamese village – is also ironically invoked, but no, probably not where you’d expect. Lee extends his critique of war’s cinematic glorification into his own film’s unconventional flashbacks to the squad’s 1971 sortie, imagined here by DP Newton Thomas Sigel in a tight 1.33:1 ratio, complete with grainy, of-the-period 16mm film stock. And rather than digitally de-age every cast member but Boseman’s eventually departed soldier, Lindo, Peters, Lewis, and Whitlock Jr. all play themselves as they are. It’s faintly comical for a moment, but also a startling visual signifier of the passage of time and the ghosts which exist within our memories.

Lee goes further still, though, staging these flashbacks as exaggerated parodies of corny oorah war movies. While certainly cute and effective at first, it’s ultimately not quite a funny or clever enough conceit to justify the number of times it’s deployed throughout the movie. The intentional chintziness of these scenes just feels a bit too playful for the serious point Lee’s actually trying to make.

And that’s really the tenor of Da 5 Bloods down pat; if you’re expecting subtlety you’ve probably never seen a Spike Lee movie before. BlackKklansman persuasively proved the soul-wrenching power which can be derived from the sledgehammer approach, and in our present, should the oppressed simply express their anger through “civility” – cinematic or otherwise? Not a chance.

Furthermore, in 2020 it’s certainly appealing to see a movie vocally dunk on Donald Trump in its opening passage without simply whispering it or using a Trump proxy, even if some of the film’s wider commentary eventually becomes tiresomely expository. A McDonald’s restaurant looms clearly in the background in one Vietnam-set scene, which is enough to make the point about the manacles of American imperialism. But of course, a character has to also verbalise it in case you didn’t catch the literal neon sign for yourself.

The film is far more effective when it gets down in the weeds with its more specific, unified thematics – namely how the Vietnam War was simply another means for white elites to enslave and kill black people, and the slippery elusiveness of what reparations actually mean in practise. One of Da 5 Bloods’ most memorable and stirring scenes shows Vietnamese market traders desperately trying to offload their wares to our aged protagonists, who quickly respond with dismissal and hostility. The Vietnamese blame them for their complicity in levelling their land, confirming how efficiently the U.S. government managed to turn two embattled races against one another in the pursuit of their own dubious “progress.”

The pic’s second half sees a transition into a more card-carrying genre film, albeit still wrapped entirely in its righteously angry context. As the team begins their hunt for the buried gold, the movie opens up into a lush, screen-filling 16:9 ratio, and though there’s an almost wilful tedium to the early moments of this quest, Lee soon lets loose with several back-to-back action and suspense sequences.

These set-pieces are, admittedly, of varying quality. Lee isn’t a naturally gifted action filmmaker and it sadly shows here quite often; the climactic standoff in particular is a sloppily edited collage of unfussed coverage, which combined with excessive use of garish CGI blood and obvious digital muzzle-flashes invites comparisons to tawdry action-thriller tosh.

Several action beats – particularly one involving an explosion – are also blocked in such a manner that they’re immediately telegraphed to the audience, which for a director of Lee’s caliber is especially disappointing. But Lee nevertheless ensures to stick the landing with a powerful finale which nods to our present moment in a stunningly overt way – if not reaching BlackKklansman levels of emotional brutality.

What carries this film through even its muddled moments, ostensibly, is the tireless work of a strong ensemble cast. Everybody’s understandably singing the praises of Delroy Lindo right now, who through his character Paul crafts a complex and devastatingly sad picture of guilt-infused PTSD.

As a Trump-voting, MAGA hat-wearing black man who won’t dare look the Vietnamese in the eye, he’s at once a sympathetic figure and also one emblematic of how cycles of hate and racism are able to propagate. Lindo gets several magnificent, fourth wall-breaking pieces-to-camera later in the film which in of themselves should render him an Oscar contender by year’s end. Again, though, everyone’s on their A-game; Clarke Peters is especially outstanding as the OxyContin-gulping Otis, while Lee regular Isiah Whitlock Jr. impressively puts his iconic The Wire catchphrase (“Shieeeeeet!”) to its best use in years, all without disrupting the movie’s dramatic momentum.

Even with its literary scope and impossibly relevant subject matter, Da 5 Bloods does admittedly lack a little of the propulsive verve and tenacious bite of the director’s best films, in part due to that everything-and-the-kitchen-sink approach to storytelling. Less isn’t always more, but by the end of this film’s 154 minutes, it certainly felt like it would’ve been.

The script, for all of its ambition, is rife with contrivances – characters showing up and discovering things just when the story needs them to – and there are artistic decisions that seem bizarre simply for their own sake – like having all subtitled dialogue capitalised for every single word – but the emotional power of the whole is what ultimately wins out here.

Lee, no mind his missteps, considers war – Vietnam in particular – in an urgent and fresh context, while leaving audiences with the brutal nugget of truth that in America, and indeed in the entire world, “green is more important than black.”

If its potential greatness is stunted by Spike Lee’s sheer excess and occasional clumsiness, Da 5 Bloods still wrings truth and power out of its uniquely presented, brilliantly acted war story.