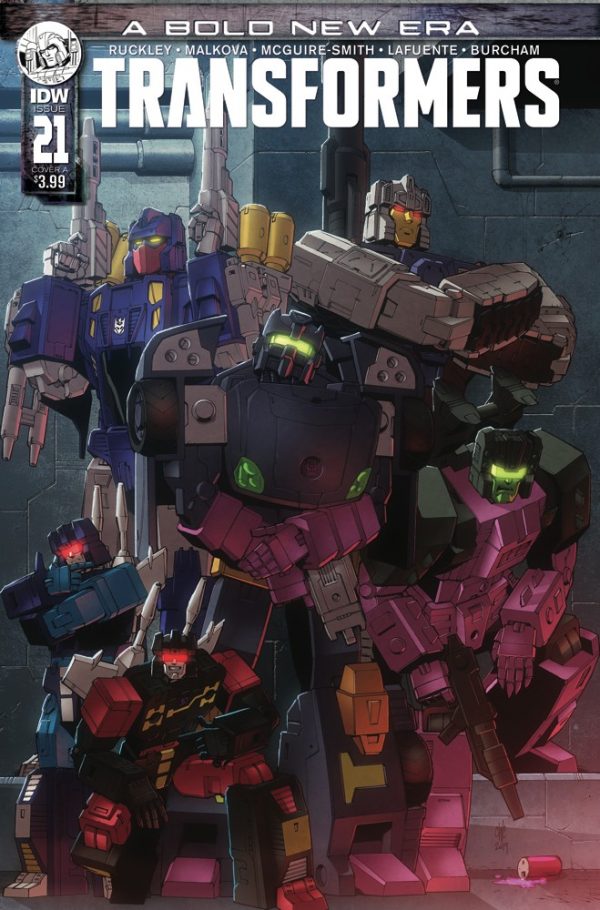 ‘Rise of the Decepticons’ in the latest issue of Transformers is certainly living up to its name as Brian Ruckley wastes little time in getting to a fight between Cybertron’s security team and several early Decepticon members. It’s another instance of Ruckley paying off on some seeds he planted in his story many issues ago as several characters converge all the while Megatron makes one of his biggest moves yet in controlling the future of Cybertron.

Transformers #21 focuses mostly on the skirmish between the two opposing forces as Quake and Frenzy, the two bots wanted for the murders that set off this chain of events, have finally been found. Ruckley makes some great use out of the characters he utilizes here, even if a few of them just make cameo appearances. One intriguing aspect was getting a better look at how the group of Risers – or now early-Decepticons – operated with each other, showing a very limited view of teamwork and co-operation for the most part. None of them are really unified in the way Megatron has in other iterations, but Ruckley is taking the steps to get there as Megatron makes a big pitch to all of Cybertron.

The issue was mostly focused on the action, but what little there was of the political situation and tension with the Autobot security force was interesting as Bumblebee formally rejoined the group after Megatron ordered his assassination, just in time to witness Megatron’s televised speech to the planet. Ruckley wrote Megatron well in this sequence as he officially claimed the title of Decepicton and tried pushing much of the blame for Cybertron’s woes onto the Autobots. Previous issues have established he has some legitimate grievances against the rules placed on Cybertronians, but it is clear how far off the path he’s already strayed despite his reasoning, enough so to make Orion Pax and other bots fully realize he’s been pulling the strings on much of their investigation.

The artwork from Transformers newcomers Billie Montofrt and Blacky Sheperd is fluid and animated. The big fight scene is depicted in an easy to follow manner, never losing sight of the main combatants or what is happening. Their character work is detailed in places, particularly their facial expressions for the transformers. The beginning scenes seem a little static in a few panels however, but Montfort and Sheperd provide a fair amount of energy to all the character’s movements and posture that it doesn’t make a large problem. Joana Lafuente and John-Paul Bove’s colours work well with what Montfort and Sherperd’s have done, creating a very vibrant issue with all the different characters and what is happening to them.

Transformers #21 is another nice-step forward in the current arc as Ruckley plants some seeds while fully exposing others in his long-game narrative. The tension between the Autobots and Decepticons is well handled while the decision to give some of he villains, namely Frenzy and Rumble, more page-time gives it a different feel to some of the recent issues. The art from the whole team is very good, creating some exciting action beats. ‘Rise of the Decepticons’ continues to be a very interesting and entertaining story.