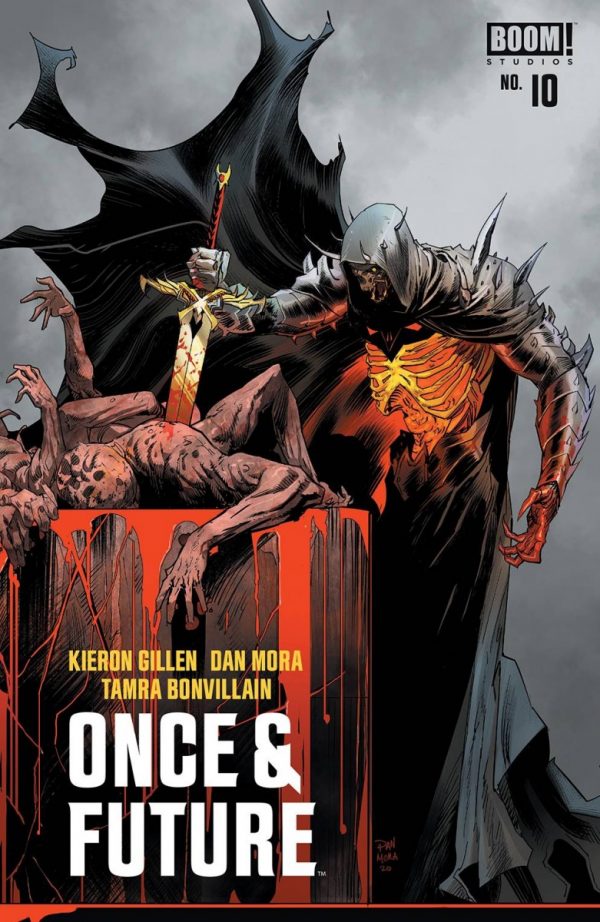 The hour is late, the danger not yet passed and the focus of Grendel’s attack is a little old lady, one who should never be underestimated it seems. Once & Future throws us straight back into the story where we left off, as the large hulking form of Grendel focuses solely on a care home where one of our main characters stays.

The race is on for Duncan, which is even harder when his car was the scene of an attack from Beowulf in the last issue; keep up people its not that difficult to keep track of all these people/beings! After dispatching the legendary warrior the enemy from classic literature appears to cause havoc once the hero is dead.

Once & Future continues to amaze me with the rich colours and attention to detail that is focused into every single panel of each issue. A dark and wonderful tale matched purely by the art direction and character designs, the pages come to life with the twisted creatures that are encountered within these pages.

The design of the creature Grendel is one of a hulking mass; the creature has certainly been designed to be as intimidating as possible, one that would genuinely make people turn and flee from it. The element of belief may not be the strongest thing in this story, but when it comes to the intimidating features of foes and villains, they have certainly nailed it.

The issue speeds to a cliffhanger close, setting up nicely for some confrontation in the next issue, where our characters will hopefully be once step closer to defeating a foe from classic literature, confronting Duncan’s m0ther, and finding out what Merlin is up to and what strings he pulls from behind the curtain.