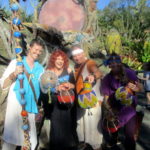 Alec Frazier on the recent controversy about Disney World and childless adults… Recently, a parent went on social media and claimed that childless millennials and other individuals without children should be banned from Walt Disney World. This claim has stirred up a great deal of controversy, so we have come up with five valid reasons […]

Since Disney purchased Lucasfilm, it was only a matter of time before the Star Wars theme park attractions at Disney World were going to expand. Disney Chairman and CEO Bob Iger spoke about the expansions and plans in an interview saying, “there will be a much larger Star Wars presence in our parks globally. But we want […]