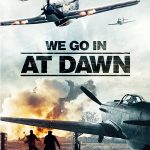 Thanks to Reel2Reel Films, we’ve got an exclusive look at the trailer for We Go In At Dawn, a World War II action adventure film which is directed by Ben Mole (Mystery Files, Ancient Discoveries) and marks the film debut of British star Kelvin Fletcher (Emmerdale) who appears alongside Christos Lawton (The Terror), Audrey L’Ebrellec […]